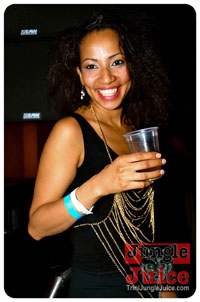 An event that everyone was looking forward to for the past few months, was XEN 2013! With every attempt to bring back the DC Carnival in Washington DC, Xen has been one of those events that held its own for the past few years, and could possibly be the catalyst for keeping the Carnival vibrations alive in DC.  With an exciting cast that included 5 Star Akil, K Rich and Cassie, the show was on its way to pleasure the hundreds of patrons. The addition of Patrice Roberts, moved the show from good...to great! Held at the Love Night Club in downtown Washington D.C., this event had everything you could ask for....Good looking women, great vibes, nice location, and big time DJs. Xen 2013 was fantastic!

CROWD:
The place was packed but everyone had enough room to buss a little wine or two. Good looking people all over and well dressed. Afterall...it's XEN! And if you look closely, you can even spot Demarco in the dance!

VENUE/ACCESSIBILITY:
The venue is one that the people know. With multiple floors...the Xen promoters kept the best one for themselves. Nice decor, a long bar, big enough stage for the artists and DJs, the floor that Xen occupied was perfect for this event. On the outside, it was tough for parking but I think everyone got themselves organized. Tight..but organized!

VIBES:
The vibes was through the roof! The artists all delivered. 5 Star Akil flew in from Trini and certainly stamped his name on DC. We would certainly hope for a longer performance from him in the future though. As for K. Rich, he had women begging him to stay on the stage. See the pics for yourself. Cassie as usual performed in fine style while Patrice Roberts, no stranger to the game did what she is best known for, give exhilarating performances. From the DJs perspective, Sprang has consistently been a face in DC and the people know what he can do. And to complement the night was DJs Private Ryan and DJ Back to Basics! Wait a minute...both of them on one night? On the same stage? Who could believe that? Well we did! From tune to tune, wine to wine and session to session, both DJs rocked the hell out of Xen!

FOOD & DRINKS:
There was not much to talk about for food but there was an open bar and drinks were flowing.

SERVICE:
As always, the BK Entertainment crew has done a great job in keeping everyone happy. From their patrons to their vendors. We were happy with their service all around. No complaints whatsoever.

COST/VALUE:
Early bird tickets started at $30. For the full cast of artists and DJs...there was no complaint in cost.

After another year, XEN has pulled it off again...great show, fantastic vibes, good people, best music and top of the line service. We were pleased with this event and will be sure to be back for Xen 2014! Jason and crew, great job here on this one!