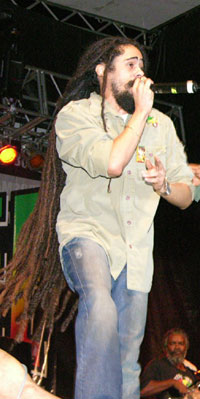 NY: This year’s staging of Caribbean Fever Irie Jamboree  a the Barclays Center in Brooklyn over Labor Day weekend will bring a brand new element of entertainment to Caribbean celebrations in Brooklyn this year.

The three night music festival that features icons from different genres of Caribbean music each night at the ultra-luxurious Barclays Center in the heart of downtown Brooklyn is a first for the Caribbean celebrations here.

While there has been a fair amount of soca music in the past, reggae music which is so vastly popular across New York City has never had its fans adequately serviced. This sizzling new event will raise the bar in a big way for all music lovers. It will also provide superlative, world-class entertainment for residents here as well as for the thousands who visit New York each Labor Day weekend from across the Caribbean Diaspora.  This exciting, new festival will effectively infuse fresh energies and breathe new  life and into Labor Day Caribbean celebrations in Brooklyn.

“What we have done this year is to take a successful premium product that has been tried and tested, and we have placed it in the heart of the Caribbean celebrations in Brooklyn over Labor Day weekend”, Steven Williams, one of the event promoters said.  “The response so far to the galaxy of stars on the concert lineup has been fantastic and we are looking forward to delivering first class entertainment in Brooklyn”, Williams continued.

Caribbean Fever Irie Jamboree will run from Friday August 30 to Sunday September 1. Friday night will feature extraordinary talent from the French Caribbean. Saturday night is sensational soca and Sunday night is an explosion of reggae rhythms from Jamaica.

Ticket sales are pointing to a phenomenal interest in Damian "Jr. Gong" Marley on reggae night, following on his mystifying performance at Reggae Sumfest in Jamaica recently.

“Jr. Gong Marley’s performance at Sumfest was pure Marley magic and appeared turbo-charged by supernatural forces”, one seasoned critic said.  “It was as if his father (Bob Marley) was performing there with him”, she added.

Marley will be joined on the Irie Jamboree Sunday night by I-Octane, Shabba Ranks and Capleton. Other Caribbean legends on Caribbean Fever Irie Jamboree are Wyclef Jean, Kassav and Tabou Combo on Friday night and Bunji Garlin, Fay-Ann Lyons, Edwin Yearwood, Alison Hinds and Iwer George on Saturday's 'Carnival Mania.' For more, log on to www.iriejamradio.com