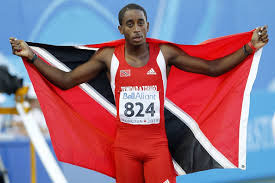 The drizzle that hazed the Port of Spain skies did little to dampen the spirits of Trinbagonians who looked and listened in anticipation of glory from 21 year old hurdler Jehue Gordon who became only the second Trinidad & Tobago athlete to win gold at a World Championships. After Gordon squeezed past the USA’s Michael Tinsley in the closest of finishes to step over the line in a world leading time of 47.69, the world came to know the new champion, who two years earlier missed out on a World Championship medal in the gruelling one-lap event.

Speaking on the achievement, the Honourable Anil Roberts, Minister of Sport said Jehue’s performance was flawless, majestic and well-deserving of the gold medal. “Jehue ran a perfect race, and more importantly, his own race, attacking all the hurdles with a smooth and consistent stride pattern. In the home stretch, Jehue fought for the gold medal, seeing it within his grasp. It was undoubtedly one of the most thrilling victories Trinidad and Tobago has ever seen.”

Chairman of the Sports Company of Trinidad and Tobago, Sebastien Paddington said the race was ‘another brilliant performance by one of our national athletes. Jehue’s youth and now, his experience on the world stage is a sign of positive results in the coming years”. Jehue Gordon’s time was not only a personal best for the University of the West Indies (UWI) student but also a national record, eclipsing the mark he set at the 2012 London Olympics of 47.96.

The management and staff of the Ministry of Sport and the Sports Company of Trinidad and Tobago congratulate Jehue Gordon on this World Championship gold medal, wish him every success in his future races this season and look forward welcoming him home.