By TJJ Admin
Published on 03-Sep-13
For Trinbagonians living abroad, the commemoration of our country’s Independence presents a significant opportunity to unite with fellow nationals to celebrate their identity. This past weekend, the Trinidad and Tobago High Commission, London was a hub of activity for national celebrations, as it marked the 51st Anniversary of Independence with ... 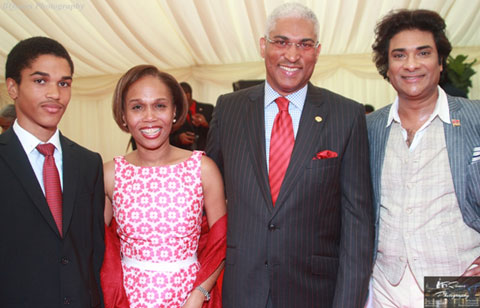 For Trinbagonians living abroad, the commemoration of our country’s Independence presents a significant opportunity to unite with fellow nationals to celebrate their identity. This past weekend, the Trinidad and Tobago High Commission, London was a hub of activity for national celebrations, as it marked the 51st Anniversary of Independence with a jubilant 3-day stretch of festivities and thanksgiving.

The celebrations kicked off on Friday 31st August when the Church of England paid tribute to Trinidad and Tobago’s Independence with a special Evensong choral service at the historic Westminster Abbey. In attendance were His Excellency Garvin Nicholas, staff members of the High Commission, prominent nationals and members of the diplomatic corps. The service underscored the importance of Trinidad and Tobago to the Commonwealth and the unwavering ties between Trinidad and Tobago and the United Kingdom.

For many, the highlight of the weekend was on Saturday 1st September when the High Commissioner hosted a diplomatic reception at his residence. The grand affair was attended by numerous representatives of the international diplomatic community, including High Commissioners from Sri Lanka, Nigeria, Columbia, and Japan, among many others. In a break from convention the High Commissioner opened the reception to nationals, who were all buzzing with excitement and anticipation for the festivities ahead. The event combined the elegance of a traditional diplomatic reception with the warmth and energy unique to Trinidad and Tobago, made apparent by the tropical setting and sumptuous red, white and black decor.

Extraordinary local talent was showcased, with a moving rendition of the national anthem performed by dramatic soprano Anne Fridal and the C.S.I. steel band, led by Brent Holder, MBE. Guests were also thrilled by performances from internationally acclaimed tenor Neil Latchman, who put an operatic spin on classic local tunes such as ‘Nah Leaving’, ‘Jumbie in de Road’ and ‘Dingolay’. While they enjoyed Latchman’s performance guests sampled delectable local cuisine such as callaloo soup, geera pork skewers and curried duck. Attendees remarked on the splendid representation of Trinidad and Tobago’s culture and thoroughly enjoyed the festive atmosphere made electric by the melodies of soca, chutney and calypso music.
The celebratory weekend culminated with an Inter-Faith service held at St. Peter’s Church. In an illustration of the diversity and harmony of Trinidad and Tobago, several faiths were highlighted at the service, including Christian, Orisha, Hindu and Muslim. The service was bolstered by outstanding thanksgiving performances by Trinidadian baritone Marvin Smith and the London Gospel Community Choir. Proceedings were led by Father John Metivier with the homily delivered by Father Forrester, Rector of St. Andrews, Scarborough.

It was here that the High Commissioner delivered his stirring message to nationals at home and abroad. In his address, Nicholas displayed striking candour as he called for the nation to “wake up from our slumber and take back our country from the negative forces which threaten our harmony and solidarity”.

“The significance of Independence is that a country’s citizens, every one of us, have the power to shape our destiny, and this is a duty we must all take very seriously,” Nicholas stated. “Corruption and criminality can only be allowed to thrive as long as we allow it, and on this occasion of Independence it is my wish, in fact it is indeed my prayer, that we, the people of Trinidad and Tobago can look within and find the strength and courage to stand against these roadblocks to our continued development”. The High Commissioner’s ardent call to action was received with resounding applause by the congregation, signalling a profound end to a memorable Independence weekend.