By Salih aka Uptown Juice
Published on 01-Sep-13
O ME O MY... What a venue! This venue will go down in my book as a New York favorite... with a dynamite back drop of key city buildings, bridges and ...
>> View Tan Ta Na Gallery
>> View Labor Day 2013 Carnival Coverage 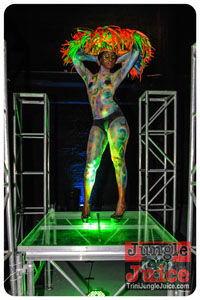 O ME O MY... What a venue! This venue will go down in my book as a New York favorite... with a dynamite back drop of key city buildings, bridges and such. Vale Vibes and Sugarcane really set up this event in grand style with a ton of class and culture.

There was outdoor and indoor atmospheres; indoor was decorated with slide shows of carnival advertisements, women in costumes in cage like displays, and there were also folklore characters dancing around the crowd. After all this amazement I had to fill my belly. On the menu was goodness after goodness supplied by Sugarcane from fish to macaroni pie, veggies, stew chicken..... I'm getting hungry thinking of it.... take my word it was delicious!

TV shows are filmed on the inside part... so the building was sound proof and warm... the DJ booth was center floor with the bar at the far end with floral arrangements that were suitable for Valentine's Day. TJJ made some very nice new friends and took a wine (or two) on old ones. All the while in amazement at the continued success of the Vale Vibe & Sugarcane union, my only gripe with this venue was the parking, or lack of it. The line was down the block well into the night.

At around ten minutes to the party's scheduled ending there was announcement made saying, "If you don't want the party to end everyone come inside so we can close the doors." Well needless to say, most were selectively deaf. The music stopped the lights came on an everyone was told goodbye. So next year when the announcement is made, please take heed people and head inside, because I don't want another abrupt end to a great time!