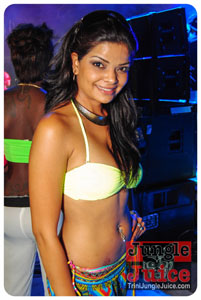 And it was Bubble Butts in Bikinis galore with the over 10,000 Electronic Soca and Dancehall fans that came to the inaugural WeTT Republic festival at the O2 Park, Chaguaramas, Trinidad on the night before T&T’s Republic Day Holiday!

With the exception of the lack of good logistics at the gate to get in to the event, WeTT Republic was however the ideal formula for an epic event with 7 Headlining Acts and over half a dozen DJs on the bill.

After the half an hour wait to get through the only gate for the entire festival it was clear that most people opted to be a part of the VIP areas with their all inclusive zones featuring other promotional groups like Zen Night Club, Scorch, Passions and Island People Carnival Band; and major sponsored sections by bmobile and Red Bull.  While the Electronic Remix Fans in the general sections were enjoying themselves with their own drinks from the coolers that they were allowed to walk in with.

From the moment the gate was opened promptly at 11pm you were made to quickly realise that this was no ordinary show as the impressive digital screens and displays that framed the stage could rival any European Rave Music Festival.  Then hitting the stage as quick as a techno beat was the first set of local acts Moses, Swappi and Lozeno who warmed the crowd with electronic infused renditions of their many soca hits.  This was punctuated with performances by T&T’s best DJs who kept the crowd totally hyped.  But it was DJ Artiste Team who administered the most potent dose of EDM that left everyone in a hard core electro trance! 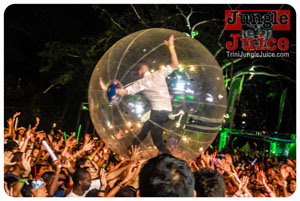 Seamlessly next on stage was Kryo DJ featuring two 10 feet tall full effects LED Kryoman robots.  But other than the presence of the two robots and the lack of a hype man at Kryo DJ’s side you would have mistakenly thought that it was another local DJ on stage and not one of the headlining acts.

The energy level suddenly increased by a couple Mega Watts as Walshy Fire, Diplo and Trinidadian born DJ Jillionaire who collectively known as Major Lazer hit the stage for an hour plus long performance featuring Bunji Garlin and Machel Montano.  And the energy continued to rise as Diplo even surfed the crowd while being encased in a party bubble!  It was at that time the stage managers had no choice but to try to cool down the crowd to prevent a total electronic melt down by signalling the water cannons to turn on much to the crowd’s delight!

In the end this event was EPIC that even with over 10,000 people in attendance no one left until after the sun was high up in the sky around 7am!!!