By TJJ Admin
Published on 03-Oct-13
Port-of-Spain, Trinidad. October 2, 2013 -- To influence change, one must be the change that they’d like to see. PengCo Music’s Randal Alexander believes the Trinidad and Tobago artistes he recently worked with, are making inroads with their personal objectives and they are ... 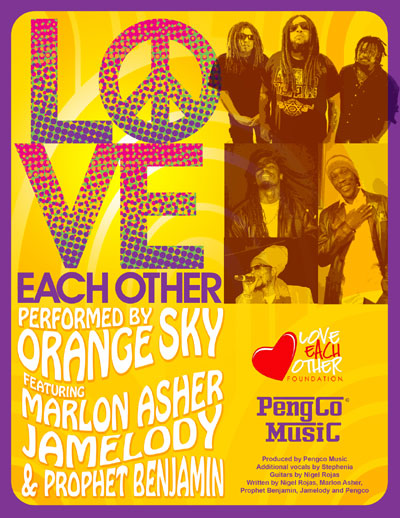 Port-of-Spain, Trinidad. October 2, 2013 -- To influence change, one must be the change that they’d like to see. PengCo Music’s Randal Alexander believes the Trinidad and Tobago artistes he recently worked with, are making inroads with their personal objectives and they are influencing change. Marlon Asher, Nigel Rojas, Jamelody and Prophet Benjamin are the four names that radio personalities will soon be rattling off their tongues as the single, ‘Love Each Other’ penetrates the airwaves.

The song, which was written collaboratively by all four artistes, along with Alexander, was done for the last conscious event held in Trinidad and Tobago, which featured Jamaican acts, Sizzla Kolonji, Louis Culture and Richie Spice but since that time, the power of the track has admittedly consumed each of the vocalists in quite a special way they say, and now with the official release imminent, they’re anticipating nothing but smiles from the masses whose hearts they hope to touch.

VP Recording artiste, Jamelody says the track represents everything that he continues to be persuaded by. He hopes the lyrics, melody and unity that is represented by the collaboration of all four entertainers will penetrate the souls of the people of Trinidad and Tobago- this amid the heaviness of continued societal ills in his homeland. The entertainer who has been compared to Jamaican reggae crooner, Jah Cure and others of that caliber during his career, says he is saddened by what he continues to see happening around him relative to crime and violence and as such, he is committed to contributing in a meaningful way with high hopes that his voice, compassion and spirit can influence that change that is needed.

Marlon Asher is also a voice on the collaborative track and on concert night in Port-of-Spain in August, the Chaguanas, Trinidad native pulled his local reggae brothers on stage to deliver the spanking new single. Asher was extremely happy to be a part of the track, explaining that it was a good feeling to be involved in something that saw the coming together of some of the original members of the local reggae fraternity. The lyrics too, were enough to engage him, said Asher, who has been championing the need for more love and lyrics of peace and togetherness.

In recent weeks, there has been an outpouring of positive energy among local entertainers who seem to feel obliged to do their part in the fight against negativity at home. The release of ‘Love Each Other’ comes on the heels of the SeaLots Riddim medley, which features Machel Montano, Prophet Benjamin, Collis Duranty, Positive and Jamaica’s Morgan Heritage. Alexander, having produced the music for ‘Love Each Other’ describes the track as a true expression of what lies in the hearts of everyone who played a part in the project. “If we love each other, there would be no reason for anarchy. Peace would reign so knowing that, these guys have banded together to preach it and hopefully their contribution will have a strong impact. I think that’s really commendable,” he said.