Bunji Confession/Call Me by Khari Kill 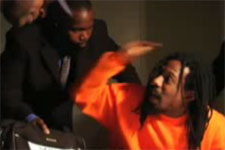 In a recording studio back in the states, Brooklyn, New York to be exact, right down on St. John’s and Nostrand Avenue our source ran into the infamous Kill aka Khari Kill working with Muscle from Artical One Productions on their latest Soca project.  Upon meeting Khari for the first time it was easy to see that he lives music, as he exudes a regal, spiritual vibe that is undeniably felt by all around him.

With a strong voice he says, “Weh’s de scene” our source then proceeded to ask him about the latest controversy in his new Soca song titled “Call Me,” recorded by Artical One Productions on the Te Pica Riddim.  With a smile Kill looked over and said “What controversy?”, then reached for a DVD with live footage of himself and Bunji Garlin on stage at the Elite Ark in Brooklyn and there it was, “The Confession.”

Khari why did you choose to sing a song on this topic?

Khari replied, “People does see me and ask me why yuh doh put out ah Soca tune for carnival?...not knowing I have been putting out sweet Soca music over the years and have not been able to be recognized, even though I am an established musician that’s known to the world for my Reggae music, with hits such as “Picture of Selassie.”  So I say, yuh know wha, I go put out a song dat go cause bacchanal because carnival is bacchanal and bacchanal is carnival, as meh brethren Jah Bami say before dey thief he style”  then he laughed.

So what exactly is this confession?

Well, some say it’s another true testimony from the voice of D. Ghetto.  While others say that it’s the spark of controversy.  So, you’ll have to be the judge.  The only way to find out what all the talk is about is to check out “Call Me” and hear the Confession for yourself.

Before leaving, Khari gave some insight on his second new Soca tune recorded by Artical One Productions entitled “Set Up” on the 911 Riddim.  He said, “The ancient monarchy, coming for the monarch.”

For more info on KHARI KILL, logon to myspace/kharikillmusic.com or for more about Artical One Productions and current artists and projects call (347) 992-8643 or email: Articalone@gmail.com.