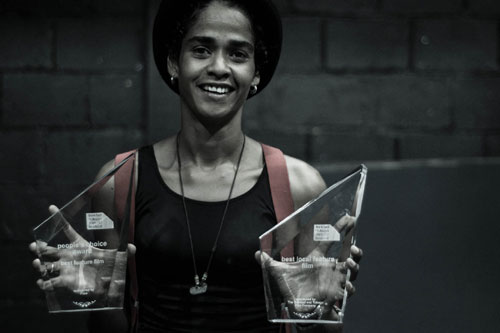 [Thursday 17th October 2013] Of all the films of which were exhibited and in competition during the ‘hotter’ Trinidad and Tobago Film Festival, God Loves The Fighter was, without a doubt the hottest ticket in town. Produced by the team of Alexa Bailey and Director Damian Marcano, God Loves The Fighter tells a different side of the tourism-driven ideal in Trinidad and Tobago. The movie is gritty and stark and follows the lives of inhabitants of the island Capital of Port of Spain and depicts how different decisions can lead to better lives or to unexpected turns for the worse.

The film was entirely produced and filmed in Trinidad, with an all-local cast of actors. At each of the screenings there was an overwhelming response. Masses of audience members rushed for tickets and stood in lines for hours before the film for first come first served seating. The demand to see the film was so great, that an additional screening was opened at the Movie Towne Multi-screen cinema venue. A second screening room also had to be opened for the free University of the West Indies (UWI) showing to accommodate the crowds of students and general public gathered outside the UWI Film Building seeking a chance to view this ground-breaking film.

At the festival, the film took the Jury award and cash prize for the Best local feature film and also won the coveted People’s Choice Award. The vocal and sometimes controversial responses of the cinema patrons after the film in the official question and answer sessions also gained a certain level of notoriety. While the film was praised for its technical and cinematographic quality, questions on ethnicity, political implications and also the validity of “the truth” shown in the scenarios of the film were raised. Marcano and other members of the cast, who attended most of the screenings, were often called upon to defend some of the approaches to the story and also were praised by audience members for the “realness” of the dialogue. Marcano was also commended for his success achieved in directing local acting talent. As the demand for opportunities to see this film continues, members of the public who missed the Festival continue to request more chances to see this film. The producers have confirmed that there will be more screenings after Carnival in 2014 for the film’s official nation-wide release.

As the buzz on God Loves The Fighter continues into 2014, the Bailey and Marcano team are looking forward to begin production on their second feature film entitled, “A Chance of Rain In Cleveland”. This film has nothing to do with the City in Ohio, USA, but is a story of hope and perseverance about two brothers who escape their abusive uncle for a better chance in the big city of Port of Spain.  According to Marcano "I am a filmmaker dedicated to the advancement of Caribbean cinema and I feel that "A Chance of Rain in Cleveland" would be a great stepping-stone. My intention is to create a family friendly film with a PG-13 rating to maximize the audience potential." The upcoming film has the support of Susanne Bohnet of Serafini Pictures a US based finance and Production Company in Los Angeles California who will serve as the executive producer for the film. For more information and updates on God Loves The Fighter visit www.godlovesthefighter.com or on Facebook.com, search: God Loves The Fighter.