By TJJ Admin
Published on 21-Oct-13
Trinidad and Tobago’s Olympic Sailor Andrew Lewis turned in one of the best performances of his young career, finishing 4th at the International Sailing Federation (ISAF) Sailing World Cup (Laser men) in Qingdao, China on ... 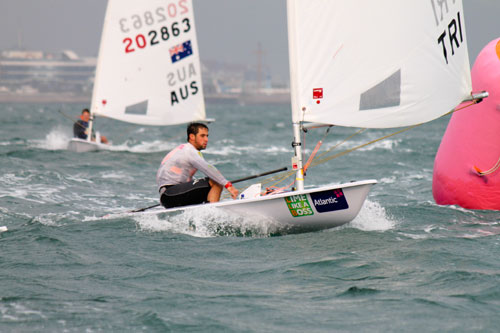 Trinidad and Tobago’s Olympic Sailor Andrew Lewis turned in one of the best performances of his young career, finishing 4th at the International Sailing Federation (ISAF) Sailing World Cup (Laser men) in Qingdao, China on 19 October.

After entering the medal round in 7th place, Lewis pulled off an impressive performance wrapping up 4th – just missing the bronze medal by two points. In a top class finale that included Cypriot Olympic silver medallist Pavlos Kontides and Croatian Olympic finalist Tonči Stipanović (eventual winner), Lewis proved his maturity and a marked improvement in his racing.

The regatta began on 12 October with Lewis turning in a series of strong races daily, finishing no lower than 10th in each. This was in spite of being admitted to hospital for tonsillitis on day 3.  Nevertheless, in race 5, he proved he understood the conditions perfectly. Lewis sailed past his accomplished opponents, completing that race in first place. However, by the end of the preliminary rounds, Stipanović had an undeniable lead, and took the gold. Ten points separated the 2nd place sailor from the 7th place, demonstrating that everyone in the final had a realistic chance of medalling.

Commenting on his performance, Lewis was elated. “I have to say that this is probably my best regatta ever. After the first two races, I was unhappy with my speed downwind and began to worry. Thankfully, I was able to regroup and trust my instincts on the conditions. In the fifth race I realized what the currents were doing, so I am very proud of how I handled that tactically”.

He went on to say, “This event tested me mentally and physically. My confidence was growing as the regatta went on, but I became really sick by the third day. It was so bad, that I passed out in my boat between races and had to be admitted to a hospital. The doctors told me I had tonsillitis but luckily the medication I was given worked well, and I was able to sail the medal race and really perform”.

There is no time for Lewis to savour the performance as he now switches focus to the Laser World Championships in Oman, starting 7 November. “I’ll be attending a training camp in either Barcelona or Portugal to fine tune before the World Championships. This regatta has done my confidence a lot of good, so I am excited to get back into training and work on the areas that I need to improve. Once I do that, I am confident that I’ll do well again in Oman”. The Sports Company expects to assist Lewis for his bid for further success at the World Championships.

Lewis who is also a Sports Ambassador with Atlantic, wanted to thank his sponsor for the financial assistance to make the trip to China.

About the ISAF World Cup