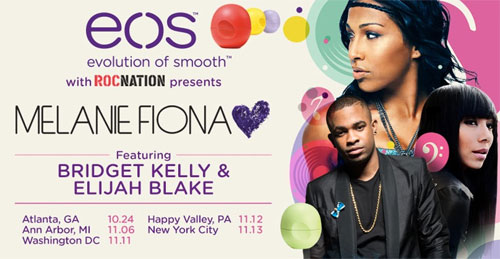 For the first time, these sensations will tour together after performing with music legends including JAY Z, Kanye West, Alicia Keys and Mary J. Blige.  Fans can look forward to Melanie performing her latest smash single "Cold Piece," which was released earlier this summer to provide free music to her fans and currently available on www.melaniefiona.com with the video being release late October.  Bridget Kelly is currently working on her second EP after taking the summer by storm with her hit singles "Special Delivery" and “Street Dreamin” featuring Kendrick Lamar. After writing the 2013 GRAMMY winning single "Climax" for Usher, Elijah Blake is set to release his second EP "Bijoux 23," following the critically acclaimed "Bijoux 22" featuring the fan favorite "X.O.X" with Common.

A game changer in the beauty space, the EOS Smooth Sphere Lip Balm has become a “must-have” cult-favorite item for college students and Millennial consumers alike.? In order to thank its fans for their loyal support and passion for the brand, EOS is bringing this unique concert experience to five popular college cities for the first time in its history -- the tour will begin in Atlanta and travel the East Coast, ending with a finale concert in New York City and EOS will be providing music fans in each market with free tickets.

How to get tickets?? Follow EOS on Twitter and Facebook and Instagram to learn how and where to secure free tickets. EOS social media handles will provide updates on the locations of EOS-branded local food trucks that will be passing out free treats and tickets the week before the concert date in your city. Tune into your favorite local radio stations and websites just days before the show to have the chance to win either general admission tickets or the VIP Experience, which includes meet & greets with the artists post-show and more.? Finally, EOS is taking over local college campuses in your city!? Be on the lookout for EOS student brand ambassadors who will be distributing tickets around campus.?

About EOS
EOS is a leading skincare brand based in New York. Known for its unique packaging, elegant design and superior products, EOS is one of the most popular and fastest growing brands in North America. EOS’ products include lip balm, hand lotion and shaving cream. Its bestselling Smooth Sphere Lip Balm (“The lip balm that makes you smile”) blends iconic design, organic ingredients and delicious, natural flavors for moisturized lips. EOS’ purse-friendly, fast-absorbing natural Hand Lotions give hands the moisture they need all day long. EOS Shave Cream is so moisturizing, you can shave wet or dry, leaving your skin softer and smoother long after. For more information visit www.evolutionofsmooth.com.

About Melanie Fiona
Melanie Fiona is a two time Grammy Award winning singer & songwriter. The Toronto native, who is managed by Roc Nation, just released her newest single Cold Piece and is gearing up for her new album release in 2014. Her sophisticated blend of R&B, hip-hop, jazz, reggae and classical flavors is ever evolving.  Melanie’s 2009 debut, The Bridge was categorized by The New York Times categorized as one of 2009’s  best R&B albums. The album’s breakthrough ballad, “It Kills Me,” topped Billboard’s R&B/Hip-Hop Songs chart for nine weeks and earned Fiona her first Grammy nomination in 2010 for Best R&B Female Vocal Performance. Her second album The MF Life, released in 2012 reached #1 on the Billboard Top R&B/Hip-Hop Albums chart. Melanie Fiona has previous toured with Kanye West, Alicia Keys, Mary J. Blige & D’Angelo and most recently opened for Beyonce on the Mrs. Carter Tour – BET Experience Show 2013.

About Bridget Kelly
Grammy award winning songwriter and New York native Bridget Kelly delivers honest, heartfelt lyrics, over powerful vocals. Bridget’s songwriting for “Einstein” from Kelly Clarkson’s Stronger album, won her the Best Pop Vocal Album award at the 2013 Grammy Awards. Now with her debut singles, “Special Delivery,” and “Street Dreamin’” with Kendrick Lamar climbing the charts, the Roc Nation songstress, has captured  the attention of fans and tastemakers alike.  She honed her performance skills early in her career, having toured with JAY Z (Blueprint 3 Tour), Estelle (BET Music Matters Tour), and performing at this year’s Essence Music Festival in New Orleans.  Bridget has been featured in top publications such as Complex, VIBE, Entertainment Weekly, The Source, and the covers of Honey and EDGE magazines and is nominated for 2013 Best New Artist at the Soul Train Music Awards.

About Elijah Blake
Very few artists are just as good at creating amazingly vivid and passionate scenes with their voices, as they are with their words – Elijah Blake, at 22 years old is one of the few.  Elijah is a refreshing dose of vocal, hit songwriting, and personal conviction. Elijah has written for/with Rihanna, Britney Spears, Nas, Alicia Keys, Mary J. Blige, Trey Songz and has also appeared on collaborations with Rick Ross, The Game, Meek Mill, Common and Keyshia Cole. Mentored by and signed to famed producer No I.D’s ARTium music label through Def Jam and managed through Roc Nation, Blake is determined to separate himself from songwriter and singer and his 2012 debut EP Bijoux 22 did just that. The EP featured the hits “Birdz”, “Talk to Me” and “X.O.X” with Common. Elijah is currently working on the Bijoux 23 EP, which is due out at the end of this year.