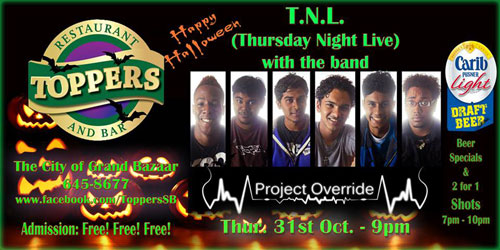 Local alternative band Project Override in collaboration with Toppers Sports Bar and Grill presents their Halloween Spectacular on Thursday 31st October, 2013 at Grand Bazaar. The band invites their supporters to come and enjoy a festive night in a relaxing atmosphere. The live performance starts sharply at 9pm, and all patrons are encouraged to arrive early.

“Whether we like or not, Halloween has slowly found its way into our culture,” stated manager and lead guitarist of Project Override Jeremy Anil Mangalsingh. “Our people have a skill of putting their own twist on international trends. I will love to see a Soucouyant, a Duoen or even Papa Bois on Thursday night during our show,” said Mangalsingh.

The band is expected to perform a full hour of alternative mash ups and originals. “There is something for everyone, the young the old and even new patrons at Toppers Sports Bar and Grill.” stated Joshua Boodram, lead singer of the band Project Override. “We are all excited to be performing at the restaurant yet again. The management and staff always make us feel welcomed.”

This performance follows two successful shows that were held earlier year. Project Override showcased several songs that had the audience screaming for more. For the Halloween Spectacular, the band has added several originals and new covers to their set list. The management and staff of Toppers Sports Bar and Grill are happy to be hosting this dynamic band for their Halloween event.

Project Override is a six (6) member band that was founded in 2011. With just over three (3) years experience in the local rock industry, the band has performed at several locations throughout Trinidad and Tobago, including The Rise in Chaguanas, J’Malones and Woodford Cafe.

Project Override will continue to perform at many events throughout the year. Please make sure to check them out on Facebook and on Youtube. You can also contact them at rockstarttprs@gmail.com