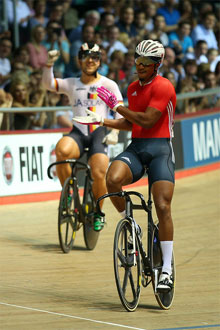 22 year old cyclist Njisane Phillips became the first UCI World Cup medallist from Trinidad and Tobago on Sunday. Phillips copped the silver medal in the Sprint, beaten by German powerhouse Robert Forstemann in both rides. The World Cup event is in its final day in Manchester, England.

Commenting on the achievement, the Honourable Anil Roberts, Minister of Sport said, “Once again, Njisane has proven to himself and the world that he is a force to be reckoned with. His performance at the 2012 Olympic Games was his introduction. Now he’s a headline act! Congratulations to the young man and his team on this achievement for Trinidad and Tobago. Cycling is definitely one of the podium sports being targeted for the 2016 Olympics and with the construction of the Velodrome in Couva proceeding at a good pace, we can expect to produce more world class cyclists and even bid to host a World Cup event in the near future.”

Phillips qualified with the third fastest time for the Sprint and had a tough route to the final, defeating Valentin Savitsky (RUS), Michael D’Almeida (FRA) and hometown hero Matthew Crampton (GBR) on his way to a showdown with Forstemann.

Another young cyclist Varun Maharaj also competed in Manchester, clocking two personal bests in the Omnium 4K Individual Pursuit (4:52.818) and Omnium 1K Time Trial (1:07.807). Both Maharaj and Phillips are riding in their first World Cup and will undoubtedly gain from the experience.