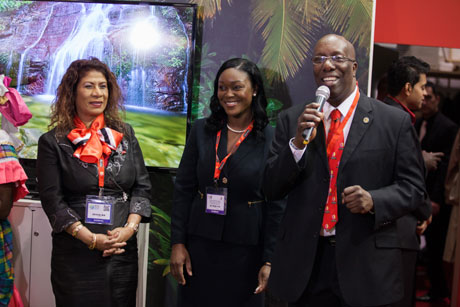 Photo caption: (L to R) Permanent Secretary in the Ministry of Tourism, Juliana Boodram and Deputy Chief Secretary/Secretary of Tourism and Transportation, Assemblyman Tracy Davidson-Celestine with Event Coordinator, John Arnold, as he announces John Legend as the headliner act for TJE 2014 at the T&T Press Conference at WTM 2013.

LONDON, United Kingdom (November 4, 2013) – Nine-time Grammy winner, John Legend, is set to take the stage at the Tobago Jazz Experience (TJE) 2014. The announcement was made today at a press conference hosted by Trinidad and Tobago at the World Travel Market in London, UK.

This marks the first time the event was launched to an international audience, including journalists from the consumer and travel trade media, as well as key stakeholders within the travel industry.

“We are committed to raising the profile of the Tobago Jazz Experience not simply throughout the region, but also around the world and so we capitalized on this opportunity to make this announcement to the UK Market, which is one of our traditional and significant markets,” Davidson-Celestine said. “Combined with a major star like John Legend, I really believe we have a winning combination to make next year’s event a great success.”

The 6th Annual Tobago Jazz Experience returns to the island from April 19-27, 2014. The event is designed to showcase the many assets of Destination Tobago by taking visitors on a tour of the island through concerts hosted in several villages.

The Division of Tourism and Transportation will host a TJE media reception for local journalists during Tobago’s Tourism Week celebrations from November 24-30, 2013.