BUNJI GARLIN’S LATEST ANTHEM “DIFFERENTOLOGY” CONTINUES TO MAKE A SPLASH BEYOND THE CARIBBEAN AND GAIN NATIONAL ATTENTION IN U.S. 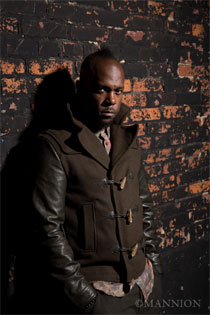 Soca sensation Bunji Garlin, who is slated to release his new studio album Differentology on VP Records early next year, has already established the title track as the biggest hit of the 2013 Caribbean Carnival season. The single, which has garnered an accumulation of over a million YouTube views since its February 2013 release, continues to make major moves in the United States.

Last week, the Trinidadian vocalist was declared the reigning champion on NYC’s HOT 97 FM’s Battle of The Beats competition. Determined by fan’s votes, “Differentology” knocked out a new contender each day during this week long face off on hip hop’s premiere radio station.

“Differentology” lands Bunji Garlin a 2013 Soul Train Awards nomination for Best International Performance. The winner will be announced at this year’s prestigious award’s ceremony, which will be held in Las Vegas, NV on November 8th and airs nationwide on December 1st.  Other nominees in this category include Machel Montano, Emeli Sande, P-Square and Iyanya.

The genre-bending song also caught the attention of DJ supergroup Major Lazer, who immediately jumped on the remix.  In addition to the song’s colorful eye-popping music video directed by Nigel Thompson, a brand new video for this remix has emerged and helped fuel the buzz to a crossover audience.

Born Ian Anthony Alvarez, Bunji Garlin is a Trinidadian artist and international soccer royalty known for his high-energy stage shows and lyrical confidence and eloquence. He is both a composer and performer of soca and ragga soca. The latter is a blend of soca with dancehall music that he made his own during the start of his career in the late ‘90s. He has won the “Ragga Soca Monarch” competition in both 2000 and 2001, the Young King title in 2001, the coveted title of International Soca Monarch in 2002 and then reclaimed this title for three more years. Bunji Garlin is currently in the studio working on his new album Differentology and recently wrapped his album photo shoot with iconic photographer Jonathan Mannion (whose credits include Lance Armstrong, Jay Z, Lil Wayne, Drake & Bon Iver). The upcoming release will be his first full-length album on VP Records since 2007’s Global.