By TJJ Admin
Published on 12-Nov-13
On Saturday 9th November, the Trinidad and Tobago High Commission, London participated in the annual Commonwealth Countries League Fair at the Kensington Town Hall, London.  His Excellency Anthony Carmona, President of the Republic of Trinidad and Tobago paid a ... 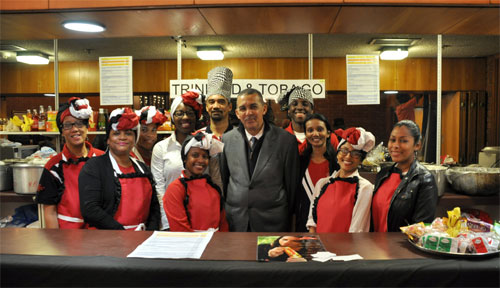 His Excellency Anthony Carmona, President of the Republic of Trinidad and Tobago paid a surprise visit to The Trinidad and Tobago High Commission Stall, much to the delight of the staff members and patrons visiting the Fair. The President, who was transiting London, commended the staff on an exceptional display.

The High Commission staff members were decked out in the national colours, with red, white and black aprons, head ties and chef’s hats. Patrons to the Trinidad and Tobago stall were wowed by the display, which included stacks of iconic locally manufactured products, such as Angostura rum, Carib beer and many others.

Visitors converged on the booth, clamouring to buy delectable local dishes, including roti, pelau, ochro rice and salt fish. Another huge attraction was the rum punch stand which had a steady throng of patrons, many of whom kept returning for more.

The Trinidad and Tobago Manufacturers Association donated products to the Commonwealth Fair and as a result, patrons were able to enjoy coco tea balls from Grande Agro Tourism Ltd; preserved fruit and condiments from Paula’s Preserves; confectionery from KC Confectionery; as well as Crix crackers and sweets from Bermudez donated by Dees Caribbean Imports. The Tobago House of Assembly also donated products from Forros’ Home Made Delicacies.

The Fair is organised annually with the help of Commonwealth High Commissioners in the United Kingdom. It is a spectacular occasion which showcases the unique crafts, cultures and culinary diversity of the Commonwealth.

Tourism Attaché, Ms. Achi-Kemba Phillips was delighted by the massive turnout and interest generated in Trinidad and Tobago. “I am very pleased that we were able to raise such a sizable amount for the Commonwealth Countries League Education Fund,” she remarked. “Our display was a great representation of Trinidad and Tobago, and its immense popularity is evidence of the desirability and value of our national products”.