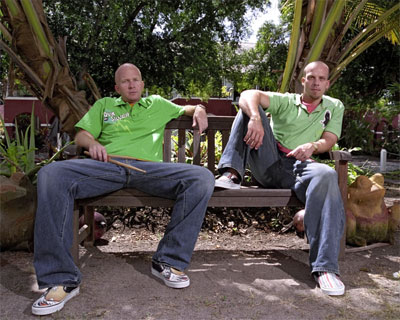 The musical tag team of Mikey Hulsmeier and Scott Galt has received affirmation and respect from Soca lovers and industry professionals globally and their productions have received mass rotation on the airwaves as well as on online Caribbean media.

The “Boyz” have released two albums prior to this latest effort, these were entitled, “De Red Boyz Blazin' Red Soca Project and Soca Bonfire”. These albums spawned numerous tracks which were and still remain prominent in several Carnival celebrations around the world, in particular Trinidad and Tobago’s annual Carnival.

De Red Boyz’s new album, “Mo’ Fire Blazin”, is currently available online for legal purchase at several internet CD stores including I-tunes, cdbaby.com and digstation.com and the music itself is gearing up to set the Soca capital ablaze for Carnival 2K9.

For any further information on the De Red Boyz, please log onto
www.myspace.com/deredboyz