By TJJ Admin
Published on 13-Nov-13
The Trinidad and Tobago exhibition at this year’s World Travel Market (WTM) was a clear favourite, eliciting swarms of diverse visitors. The recently concluded WTM, which ran from 4th – 7th November, was held at the ExCel Centre in London and featured exhibitions from ... 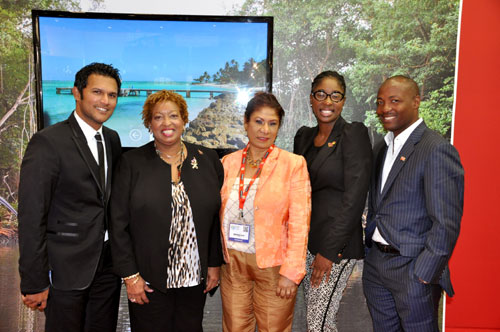 The Trinidad and Tobago exhibition at this year’s World Travel Market (WTM) was a clear favourite, eliciting swarms of diverse visitors. The recently concluded WTM, which ran from 4th – 7th November, was held at the ExCel Centre in London and featured exhibitions from over 4,900 tourism stakeholders representing 184 countries. One of the premier tourism shows in the world, WTM attracts thousands of global travel industry insiders, generating millions in business deals for stakeholders.

Amidst the plethora of dazzling displays, the Trinidad and Tobago exhibition easily stood out with its bright, open and interactive layout and the buzz of anticipation from the scores of visitors. A long line snaked around the corner as visitors waited to get their photograph taken with a Carnival masquerader against a digital backdrop of beautiful Pigeon Point beach in Tobago. Visitors were also delighted by the samples of delectable local rum and chocolate, with many coming back for more. However, of all the national products which sparked the excitement of the crowd, none were more popular than Trinidad and Tobago sportsmen and global ambassadors Brian Lara and Dwight Yorke.

Lara emphasised the personal responsibility he feels to utilise his fame to promote Trinidad and Tobago on the world stage, “I have a fierce passion for Trinidad and Tobago, and I try my best to expose our country to as many people as possible,” he stated. “As a people, we don’t even know our great value. Our strength with regard to tourism is experiential – we have the most interesting, affable mix of people I have ever encountered, and that warmth and rich culture is what should be promoted to ensure Trinidad and Tobago is highlighted on the world map. However, before this is achieved we must undertake the necessary research and focus on improving our national product”.

Fellow international cricketer and board member of the Tourism Development Company, Darren Ganga echoed Lara’s ardent sentiments. “I am especially excited about the growth of Sports Tourism. The world is changing and Trinidad and Tobago has become more attuned to the importance of focusing on our diverse tourism product, but we must ensure that we develop the requisite infrastructure,” he remarked. “To develop our tourism industry it is imperative that all various sectors – sports, fashion, business and Government – collaborate so that there can be continuity and cohesion in our specialist offerings to the world”.

Permanent Secretary of the Ministry of Tourism, Mrs. Juliana Johan-Boodram oversaw the proceedings at the exhibition and was joined by several other key Trinidad and Tobago tourism stakeholders, including Secretary of Tourism and Transportation in the Tobago House of Assembly, Ms. Tracy Davidson- Celestine, as well as Tourism Attaché at the Trinidad and Tobago High Commission, London, Ms. Achi-Kemba Phillips.

Johan-Boodram noted how important tourism conferences such as WTM are to promoting Trinidad and Tobago and advancing the local tourism industry. “This is where we generate interest in Trinidad and Tobago from the decision-makers in the global tourism industry. It is important that Trinidad and Tobago is visible at these major conferences and they also enable us to discuss and lobby for issues significant to our development,” she stated. “Our Ministry is striving to enhance local tourism via several initiatives, most recently the campaign launched in August, ‘Our Tourism, it’s about ALL of Us’, which aims to cement the importance of knowing our country and appreciating the value of tourism among nationals”.

Johan-Boodram also called for more aggressive measures to be taken against the UK Government’s refusal to rebrand the Caribbean in its Air Passenger Duty taxation scheme, a position which has been also been championed by Trinidad and Tobago High Commissioner to the UK, Garvin Nicholas.

Tourism Attaché, Ms. Achi-Kemba Phillips expressed her satisfaction with the success of this year’s exhibit. “Our various travel agencies, tour operators, hoteliers and other tourism stakeholders have made important connections as a result of the WTM, and have been able to glean great inspiration for creative ideas on how to enhance the promotion of Trinidad and Tobago”, she said. “We look forward to building on this renewed interest in Trinidad and Tobago and working further with associates at home and here in the United Kingdom”.