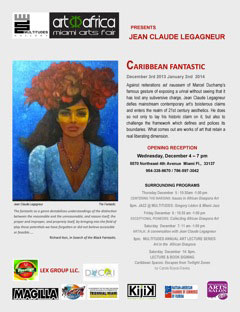 There is about to be a dramatic injection of spice and diversity into Art Basel, one of the most popular Art events that occur in the United States, with the introduction of world renowned, critically acclaimed and gorgeous art. Art Basel draws tens of thousands of persons from inside and outside of Miami. However although the event has been around for 40 years, it is not known for showcasing artists or art that come from the African Diaspora.

Fortunately this has been changing recently with the efforts of several people and organizations. Multitudes Contemporary Art Gallery owner and curator Babacar Mbow is committed to bringing forth some of that change. Mbow has a highly acclaimed, diverse and longstanding career in education and art and is uniquely equipped to source and present art from the African Diaspora.  This year’s exhibition will focus on Haiti. Haiti is the country that 1st represented African freedom and independence and the beginning of the end to slavery in the Western Hemisphere, and hence a source of great inspiration for artists. This works perfectly as South Florida has a large Haitian population and by extension a large Caribbean population.

The change towards greater diversity will go into high gear with this exhibition called “Caribbean Fantastic” that runs from the 3rd of December 2013 to the 2nd of January 2014 at the Multitudes Contemporary Art Gallery. Caribbean Fantastic features the works of the extremely talented and exciting Jean Claude Legagneur. Jean Claude Legagneur is a very successful artist whose critically acclaimed works have been seen in places like New York, South Florida, DC, Tokyo, Port-Au-Prince and Santo Domingo. His monumental Mural adorns the American Airlines Terminal at John Fitzgerald Kennedy Airport in New York.

Jean Claude Legagneur is an integral part of African Diaspora history. Legagneur is a relentless painter that has produced a large treasure of artistic gems that has been moving people since 1963. Born in Haiti in 1947 Legagneur travelled to the United States at an early age and was soon working with some famous artists and would eventually make beautiful and engaging imagery for the world to see. Besides the positive accolades given earlier, Legagneur consistently received the descriptions of sensitivity and sincerity from the critics that have reviewed his works over the years.

Caribbean Fantastic runs from the 3rd of December to the 2nd of January during Art Basel at the Multitudes Contemporary Art Gallery. The opening reception for Caribbean Fantastic will be Wednesday the 4th of December at 7pm. The reception will be at the Multitudes Contemporary Art Gallery 5570 NE 4th Avenue Miami Florida 33137. For more information please call 954-338-8670 / 786-597-3042.  Media Contact: Harris Public Relations at 786.897.8854 or publicity@harrispublicelations.com

December 4 : 7:30 PM-10 PM NIGHT OF HAITIAN DIPLOMACY : Opening Night
Under the patronage of the Consul General of Haiti in Miami , The Night of the Haitian diplomacy is at the heart of the dynamics of the new Cultural Diplomacy policy of the Haitian government. The presence of Haitian diplomats in the United States as well as those in the Caribbean and beyond is anticipated. With artists, Hollywood stars, great collectors and other guests of the city, this night will present Haiti in all its potentials.

December 5 : 8 PM-10 PM
Hollywood Artists United: An Evening with Jimmy Jean Louis
The actor who masterfully interpreted historical consciousness through Toussaint Louverture: The Battle of the Eagles is also a humanitarian whose work focuses on the construction and operation of a school in the Haitian countryside. This fund raising event will be attended by Hollywood stars with his fans and colleagues.