Norris Man Takes Us on a 'Mystical Journey' with New Album, Available on December 17, 2013 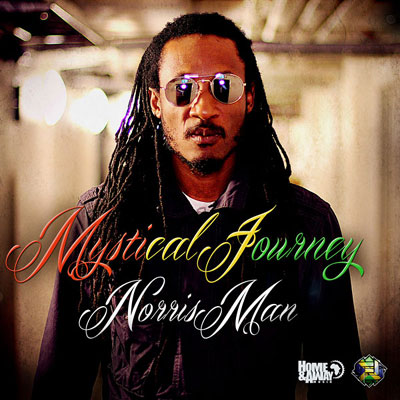 New York, NY (FOX FUSE) - Veteran Jamaican reggae artist Christopher “Norris Man” Campbell invites us on a Mystical Journey with his 13th full-length studio effort, available worldwide from all major digital retailers on December 17, 2013, with pre-order available now, from FOX FUSE. The Rastafarian singer is known for spreading positive vibes and socially-conscious messages through his uplifting, feel-good sounds, and this collection of new works is no different.

Boasting 17 tracks, Mystical Journey is stacked with guaranteed classics, guided by Norris Man’s velvety vocals and backed by quintessential reggae riddims. Taking one year to create, all 17 songs were penned by Norris Man while the album was produced by Nordic Steel with producers Henrik “Spitfiyah” Persson, Jens “Jatrix” Landegren and Iman “Russ” Esmaeilpour at the helm, and also by Norris Man under his production house, Home & Away Music. Producers Mystic Man, Ras Udo and Kevin Lewis also pooled their talents to create this must-have album for all reggae music fans.

Norris Man was born in Trench Town in Kingston, Jamaica. He spent his early days and adult years honing his craft and later secured a name for himself in the reggae landscape, before migrating to Sweden, where he now resides. He sees a clear and present need for reggae music in its purest form, and thus, conceived this Mystical Journey. “In a time where conscious music has been a force to be reckoned with and where the musical platform has been saturated, there is time for unexpected change in the way we put the album together,” reveals Norris Man. “We just keep recording and telling our stories through a spiritual connection as we continue this journey.”

Fueled by the lead single “These Feelings,” (which shines with harmony vocals courtesy of Swedish dancehall star, Million Stylez) and backed by its music video (directed by Spitfiyah and will premiere on VEVO shortly), Mystical Journey is also supported by new singles “You Got to Know,” “Babylon Affi Fade,” “Holding My Own” and “Smell The Coffee.” Norris Man plans to promote the album up-close and personal with fans during the upcoming Mystical Journey Tour, which is slated to start in February 2014 and will trek from The Gambia and Ghana in Africa, through Europe and culminate in the United States. “The mission of this album is to keep the roots of what our founders have left for us and to let the fans know that conscious music is still alive, regardless of all the commercial stuff out there,” Norris Man discloses. With this album and upcoming tour, Norris Man fulfills his personal prophecy and continues his lifelong work of building the reggae music movement, in all corners of the globe.

Mystical Journey is now available for pre-order and will be available worldwide from all major digital retailers on December 17, 2013 from FOX FUSE. For more information on Norris Man, friend him at facebook.com/NorrisManMusic and follow him twitter.com/NorrisMan3 and on Instagram.com/HomeAndAwayMusic. Please direct all press inquires to the FOX FUSE Publicity Department at 1-212-300-3813 or contact@foxfuse.com.