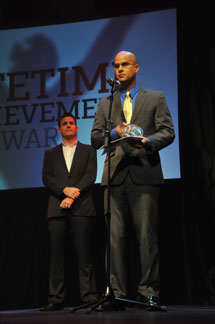 He enjoyed long life and had an illustrious career, the highlight of which was competing under the flag of the British Empire when he won 100m Bronze at the Helsinki Olympic Games. Trinidad and Tobago mourns the loss of a great athlete in Emmanuel McDonald Bailey who passed away Thursday at the age of 92. The holder of a Chaconia Gold medal had been ailing for some time.

The Honourable Anil Roberts, Minister of Sport has commented that “Bailey was a champion of excellence, not just on the track but in his family life as well. The Ministry honoured him in 2012 at the Spirit of Sport Awards, bestowing a Lifetime Achievement Award on him. Although his failing health did not permit him to attend, his spirit was certainly present as his grandson-in-law accepted the award on his behalf. Even though we have lost a great son of the soil, his legacy will live on through the thousands of persons who have benefitted from his efforts and endeavours, both on and off the track. Bailey was a man who will be remembered as a consummate athlete, respected administrator, devoted husband, father and grandfather”.

The Ministry of Sport and the Sports Company of Trinidad and Tobago send condolences to Mr Bailey’s family. His contribution to athletics in particular and to sport in general is greatly admired and will be missed.