By TJJ Admin
Published on 06-Dec-13
SCARBOROUGH, Tobago (December 5, 2013) – The inaugural flight of the Novair charter from Scandinavia landed at the A. N. R. Robinson International Airport just before 8 p.m. on December 3, 2013 with a 95 percent ... 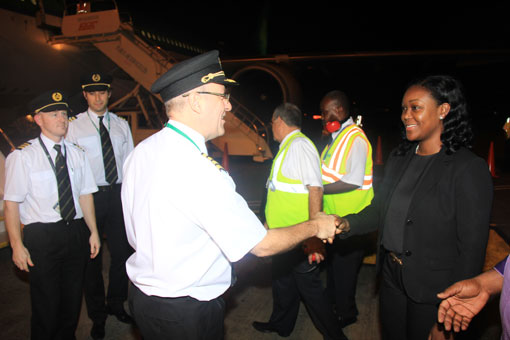 Photo: Secretary of Tourism and Transportation, Assemblyman Tracy Davidson-Celestine welcomes the Novair flight crew on the tarmac at the A. N. R. Robinson International Airport

SCARBOROUGH, Tobago (December 5, 2013) – The inaugural flight of the Novair charter from Scandinavia landed at the A. N. R. Robinson International Airport just before 8 p.m. on December 3, 2013 with a 95 percent load factor.

Assemblyman Davidson-Celestine expressed her enthusiasm over this milestone event in Tobago’s tourism industry.

“The expansion of Destination’s Tobago’s reach into Europe’s third largest outbound travel market is a remarkable feat for any destination, but particularly a Caribbean island located so far south in the archipelago,” she said. “With projections indicating that this new service will increase our arrivals from this region by twenty-five percent, it is clear that this initiative will undoubtedly reap many benefits for our tourism industry and, by extension, the island’s economy.”

The Secretary also took the opportunity to thank her predecessor, former Assemblyman Oswald Williams, and the airlift committee for their pivotal role in negotiating the introduction of this new route to Tobago’s airlift.

Commercial Director and Senior Vice President of Nordic, Takis Filippopoulos, spoke briefly about the commencement of the service.

“We tried very hard and together with the local tourist authorities in Tobago, with support from them, we succeeded in making Tobago well known in Scandinavia,” he said. “In the last three months the majority of the newspapers and the magazines were writing about Tobago, creating a very big interest in the island and the area, which we can see now with the booking numbers.”

Filippopoulos expressed Kuoni-Nordic’s confidence in the growing interest in Tobago and indicated that the airline intends to increase the number of flights on the Novair charter in the future.

The Kuoni-Nordic representative also underscored the importance of tourism practitioners providing the best service possible to their Scandinavian guests so they will have only positive things to report when they return to their respective countries.

The charter is scheduled to operate weekly out of Sweden, Denmark, Norway and Finland. Bookings for the winter season are already at 2,500.

The Division of Tourism and Transportation, tourism stakeholders and airport officials continue to work assiduously to ensure that visitors arriving from all of Tobago’s source markets thoroughly enjoy their stay on the island from the moment they arrive to the time they depart.