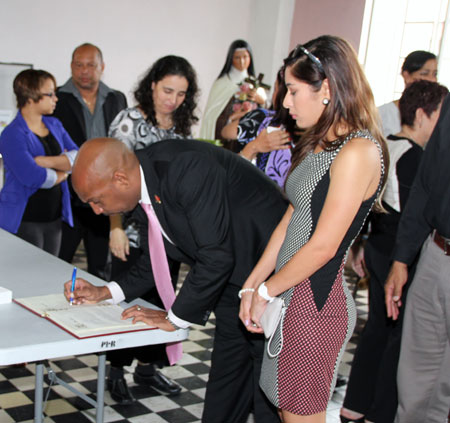 Photo: Minister Roberts signs the condolence book at the service of Gordon Delph while fiancé Shondell Nicholls looks on

The sport of table tennis lost a stalwart this week in the person of Gordon Delph, who was laid to rest Tuesday at St. Theresa’s RC Church. The former national player and coach lost his battle with brain cancer at age 56.

Paying tribute to Delph, the Honourable Anil Roberts, Minister of Sport said, “Gordon’s contribution to the sport of table tennis has been tremendous over the years. He inspired many with his style of play, represented Trinidad and Tobago across the Caribbean and the world, and turned into a thoughtful and respected coach when his playing days were over. His impact and  influence on the local game is profound and he will be deeply missed.”

The Ministry of Sport and the Sports Company of Trinidad and Tobago offer their condolences to the family and friends of Gordon Delph, a giant of a table tennis player and patriot in sport.

Photos courtesy The Sports Company of Trinidad and Tobago