By TJJ Admin
Published on 18-Dec-13
Anthony “Sandfly” Brown captured the Gordon Delph Memorial Table Tennis Tournament title at the Diego Martin Central Community Centre, in Diamond Vale, on Tuesday night. Brown, representing Solo Crusaders, battled back from two games down in the final to get the better of ... 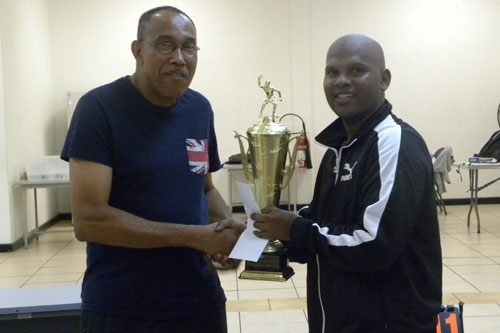 In the semi-final round, Brown got the better of top-ranked Curtis Humphreys in another five-game thriller. Brown lost the opening game, but won the next two to take a 2-1 lead. Humphreys dominated game four to set up a decider. But Brown prevailed, edging past his University of Trinidad and Tobago (UTT) opponent 10-12, 11-8, 11-7, 3-11, 11-9.

In the quarter-final round, Brown stopped Michael Nanton (D’Abadie), Sorzano got past Riad Abasali (Crusaders), Humphreys beat Kwame Laurence (Crusaders), and Alexander got the better of Declan John (D’Abadie).

The tournament was staged by the Port of Spain Zone of the Trinidad and Tobago Table Tennis Association (T&TTTA), in memory of 1972 Caribbean junior champion and 1979 national champion Gordon Delph, who passed away recently at the age of 56. Family and close friends of Delph attended the tournament.

West Bees Supermarket assisted with prizes. An attractive winner’s trophy was donated by former T&TTTA president Stanley Hunte, while other trophies were donated by Joseph Mansano, of Joe The Boss Plumbing.