Jehue is the Star of SOSAs 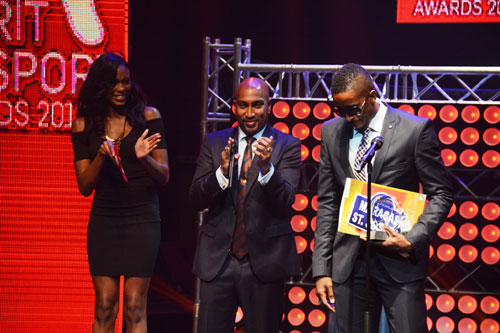 Photo:- Jehue Gordon reacts to his SOSA for Sport Performance and gift of a Maracas/St. Joseph duplex from the HDC.

World Championship gold medallist Jehue Gordon was the standout awardee at the Spirit of Sport Awards (SOSA), taking home four trophies, as well as the welcome gift of keys to a Maracas/St. Joseph duplex. The award show, hosted by the Ministry of Sport and the Sports Company of Trinidad and Tobago was held to red carpet fanfare at the Queen’s Hall was a celebration of all things Trinbagonian, particularly the 2013 sporting achievements by elite athletes and community sport leaders alike.

The 400m hurdler copped the titles of Male Athlete, Consistent Performer, Breakthrough Performance and the prestigious Sport Performance. The other multiple awardee on the night was swimmer Shanntol Ince who took home two trophies for Athlete with a Disability and Emerging Athlete.

National athletes Cleopatra Borel, Emmanuel Callender and Andrew Lewis were joint hosts of the event which featured live performances from some of the country’s leading and upcoming artistes such as Ravi B, 3 Canal, 3 Miles to Midnight and Nebula 868.

There was also a spirited exchange between the Honourable Anil Roberts and Lifetime Achievement awardee Marjorie John, an 81-year old multi-sport athlete and patriot who challenged the Minister to a race around the Savannah. Ms John joins the ranks of McDonald Bailey (2012) and Rodney Wilkes (2011) as a recipient of the award which is meant to recognise those who have given their lives to Trinidad and Tobago through sport.

A complete list of SOSA awards presented on the night is below.