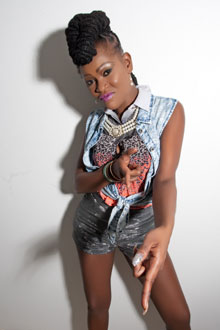 Reigning Ragga Soca Monarch of St Vincent and the Grenadines, Fya Empress (Lornette Nedd Reid), has recently been added to the line-up to perform alongside Roy Cape All Stars and Blaxx for the Trinidad Carnival 2014 season.

No stranger to Trinidad stage, the 2013 International Soca Monarch finalist said not only she was excited about the news, but was also honoured and ready to take up the mantle of the female vocals to accompany the world renowned Roy Cape All Stars. This comes after Fya Empress’s successful season in 2013, with her fete smashing soca hit, “Rum Please” produced by Slaughter Arts Production, which led her into the International Soca Monarch finals.

Fya Empress recently completed touring the Caribbean, Europe and North America and is back in Trinidad ready for the 2014 Carnival season. She said she always look forward to Trinidad’s Carnival, “the energy of the people here cannot be experienced anywhere else in the world”, she says.

Thus far for 2014, Fya Empress has released to the radio waves, her song entitled “Ah Ketch it”, produced by Andrew “Hitz” Phillip of Grenada and soon to be released,  “Earthquake 7.5” produced by Neil Bernard, carded to be launched in Trinidad on January 1st 2014.

Fya Empress has plans of being a strong contender at the International Soca Monarch and apart from performing with Roy Cape All Stars for the season; she has already been booked for major fetes in Trinidad and Tobago.