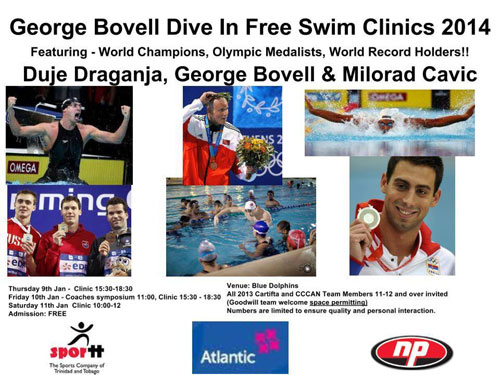 For the second year, Olympic and World Championship medallist George Bovell is giving back to the sport of swimming and will host a series of clinics for junior athletes in Trinidad, with the help of two of his medal-winning peers from Eastern Europe. The Dive In Free Swim Clinics will be held from 9 – 11 January 2014 at the Blue Dolphins Swimming Pool at CIC Grounds, St. Clair.

As a lead-up to the clinics, a press conference will be held tomorrow Thursday 9 January from 11:00am at the VIP Lounge, Hasely Crawford Stadium. Present at the conference will be Olympic medallists and former World Champions Duje Draganja and Milorad Cavic who are giving of their time to help coach the young swimmers and impart key competition skills.

Croatian Draganja attended the 2013 edition of the clinic but this is a first time visit to the Caribbean for Cavic who is from Serbia. Swimmers from age 11 and up who have participated at national junior level (Carifta, CCCAN, Goodwill, CISC) will be exposed to instruction on all four strokes, turns, dives, underwater dolphin, dry land training and race strategy over the three-day clinic. Coaches have also been invited to a symposium to be held on Friday 10 January at a venue to be determined.

The Dive In Free Swim Clinic dates and times are as follows:

The media are invited to cover the press conference on Thursday as well as the clinics over the next three days.