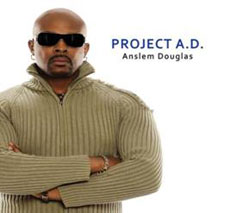 Anslem Douglas, songwriter of the internationally-acclaimed and Grammy Award-winning hit “Who Let The Dogs Out?,” has placed in the top six list of nominees, alongside AMMOYE, JAHSMIN DALEY, SHALLI, SOCA EMPEROR and MS PAIGE for Best Caribbean Style Artist at the upcoming BLACK CANADIAN AWARDS 2014 Event. Other award nominees include JULLY BLACK, K'NAAN, SAIDAH BABA TALIBAH, and KARDINAL OFFISHALL. Stay tuned for more information on the awards and the new website launch on February 1st.

Who hasn’t heard of the 2000 massive internationally-acclaimed hit and Grammy Award-winning single “Who Let The Dogs Out?” Sure it was made famous by the Baha Men (a band that utilized a popular style of Bahamian music called Junkanoo), but did you know it was written and recorded two years before, in the very exciting and traditional soca style by Trinidadian-born and now Toronto-based singer-songwriter Anslem Douglas? It was originally, affectionately called “Doggie” and here is the link http://www.youtube.com/watch?v=O27fagObxaM to that first recording, which was a huge hit in the Caribbean initially – and which is very different from the version that most of us know. The covered version was a chart success in many countries, and also became a popular song at U.S. sporting events and was featured in the 2009 hit comedy The Hangover.

The Black Canadian Awards ceremony is an event that reflects a commitment to showcasing and celebrating achievements of Black Canadian professionals, artists, trailblazers and leaders within the community. The organization has received more than 20,000 total nomination votes over the past eight months.

The Black Canadian Awards will be hosted in Toronto on March 1st, 2014 at the prestigious Queen Elizabeth Theatre, with more than1,000 people in attendance. Volunteering, affiliations and sponsorship opportunities are available.