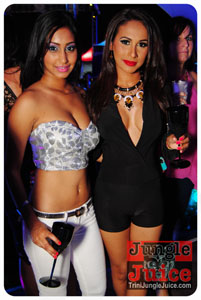 Dubbed ‘The Last One’ the final installment of WITCO’s popular all inclusive fete ensured that it ended on a high note. The 10th anniversary of the fete brought out the masses dressed to impress.

We got there just as the party was being “blessed” by a couple rain showers and for many patrons it was way too early to have their outfits and hair drenched so they sought shelter under the various food and drink tents. This provided the perfect opportunity to indulge in the various delicacies on hand. We sampled quite a bit of the sumptuous spread of international and local cuisine before heading to the drinks.

As usual the setup of the fete lent itself to almost seamless service and getting a drink was so easy we had to make sure and pace ourselves.

In a fairly long Carnival season it’s still relatively early and that may account for the more laid back vibe of the crowd. Patrons seemed to enjoy themselves thoroughly however, especially during the live performances. Shal, Nutron and Jaiga took the stage first giving a sample of their 2014 tunes. Kerwin Dubois then kept the crowd bubbling with his sweet groovy hits. After that Machel Montano HD and his full band delivered an epic performance before the Viking himself, Bunji Garlin closed off the fete accompanied by his wife Fay Ann and the Asylum band. 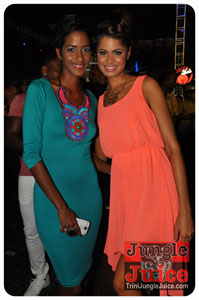 All in all we had a great night even though it was bittersweet for some as an era came to an end. Drinks were flowing right ‘til we chipped out the venue and there was also an array of cutters and piping hot doubles to soak up the alcohol on the way out.

One fete is always a great warm up that comes just as the pace of the season begins to intensify. This year being the grand finale the promoters and event planners made sure everyone was satisfied and left the venue as some of the happiest people alive