By TJJ Admin
Published on 29-Jan-14
January 23, 2014 – Port of Spain, Trinidad and Tobago. Friday January 10, 2014, marked the launch of the Hayes Court Restoration Project and Fund at a private cocktail reception held on the restoration site. The Anglican Bishop of Trinidad and Tobago, the Rt. Reverend Claude Berkley, convened the ...
Fund For Magnificent Seven Building Launched To Raise TT $24M For Restoration 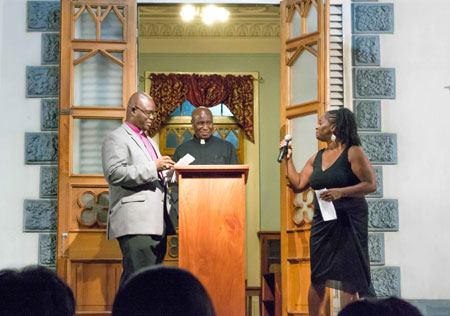 January 23, 2014 – Port of Spain, Trinidad and Tobago. Friday January 10, 2014, marked the launch of the Hayes Court Restoration Project and Fund at a private cocktail reception held on the restoration site. The Anglican Bishop of Trinidad and Tobago, the Rt. Reverend Claude Berkley, convened the Hayes Court Restoration Committee with a mandate to refurbish the dilapidated and unoccupied residence of the Bishop. With an overarching vision to preserve a monumental part of the twin-island state’s cultural and religious history, this launch signalled the beginning of on-going efforts to attract public and private sector funding to raise the TT $24.1M needed to successfully execute the restoration.

The evening’s proceedings opened with an engaging piece of Caribbean contemporary movement by the Trinidad and Tobago-based dance company, Continuum Dance Project. The retired Bishop, the Rt. Reverend Rawle Douglin, offered the blessing followed by a sobering speech by Bishop Berkley who emphasized the significance of preserving Hayes Court as a heritage site. The Bishop further went on to highlight some of the church’s strategic plans to diversify the functionality of the space to include heritage activities such as tours and the establishment of a mini-museum. Guests were then treated to a Rest-Oration oratory by traditional mas character and master Pierrot Grenade, Felix Edinborough, who used word play to issue a call to take action thereby ending the rhetoric about restoration. The programme culminated with tours of the termite-ridden and deteriorating residence led by members of the Citizens for Conservation during which pledges were accepted.

The Hayes Court Restoration Committee and members of the Anglican clergy and diocesan staff played host to a humble group of specially invited guests including the High Commissioner for the United Kingdom of Great Britain and Northern Ireland, H.E. Arthur Snell, accompanied by his wife; the Ambassador of the Federal Republic of Germany, H.E. Stefan Karl Herbert Schlüter; the Minister of National Diversity and Social Integration, the Honourable Rodger Samuel; CEO and Managing Director of the Trinidad and Tobago Mortgage Finance Company, Ingrid Lashley; CEO and Managing Director – Caribbean of the Pan-American  Life Insurance Company of Trinidad and Tobago, Miguel Sierra; Group General Counsel/Corporate Secretary of the Republic Bank, Jacqueline Quamina; architect and President of Citizens for Conservation, Rudylynn De Four-Roberts; curatorial expert and director at Heritage Development Consultants, Claire Broadbridge; and historian and artist, Adrian Camps-Campin.

Hayes Court is one of the Magnificent Seven buildings, which were listed by the Organisation of American States as an historic district on the Register of Monuments of the Greater Caribbean. Standing along the western edge of the Queen’s Park Savannah, Hayes Court is a bastion of cultural heritage and religious history. Originally conceived and traditionally used as the residence of the Anglican bishops of Trinidad and Tobago since 1910, the structure was named after Bishop Thomas Hayes, the second bishop of Trinidad and Tobago. The majestic twentieth century house has received guests including South African Archbishop and Nobel Peace Prize winner, Desmond Tutu, as well as the Archbishop of Canterbury and heads of the Anglican Church, Robert Runcie and Donald Coggan.