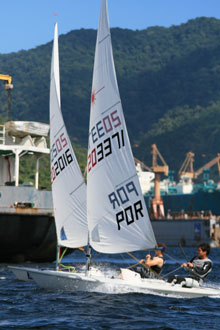 Trinidad & Tobago Olympic sailor Andrew Lewis, as the only elite athlete in the sport, doesn’t have the benefit of quality racing partners in the tiny twin-island nation. In order to improve, he says, he will need to train regularly on the water with top ranked sailors which will sharpen race tactics, techniques and awareness.

In preparation for the Miami Olympic Classes Regatta, and with the assistance of the Ministry of Tourism, Lewis got his much needed training sparring partners in Belgian Wannes Van Laer (ranked 30th in the world) and Portuguese #2 ranked Rui Siveira, who is also his country’s two time national champ. All three sailors enjoyed a 10 day training camp in the warm Trinidad and Tobago waters, led by their Coach Xavi (Goncalo Periera de Carvalho).

Van Laer remarked, “The wind is very good and the weather is perfect. Usually around this time of year we are training in some very cold temperatures so this is a good change”. Coach Xavi echoed the same sentiments. “It is great to get this level of wind in these type of conditions. Sailing on the North Coast [of Trinidad] was ideal for us as we were able to train in some heavy wind.” When asked about his impressions of the tropical country, Rui Silveira responded, “I love it here!”

The Sports Company of Trinidad & Tobago facilitated Lewis and his international guests, making available their elite training facility at the Hasely Crawford Stadium. The visitors were all impressed by the modern facility and knowledgeable staff, noting that the gym equipment met all of their training needs. 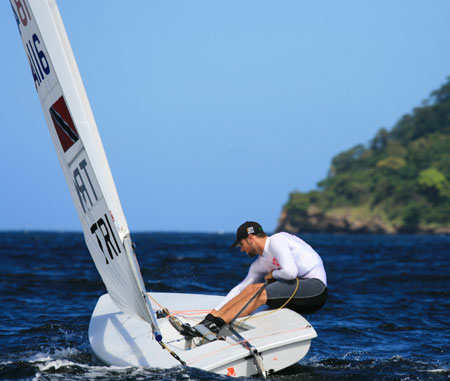 Lewis expressed his satisfaction with the training camp and the chance to sail, in his homeland, alongside some of the best in the sport. “This is the first time I have had sailors of this quality to train with at home. From all accounts, they have enjoyed themselves and I hope they will come back. I think we have an opportunity to market Trinidad and Tobago as the ideal winter training base for sailors, which will boost our sport tourism product.”

Van Laer, Lewis and Silveira are currently competing at the Miami OCR regatta which began on 7 January 2014.