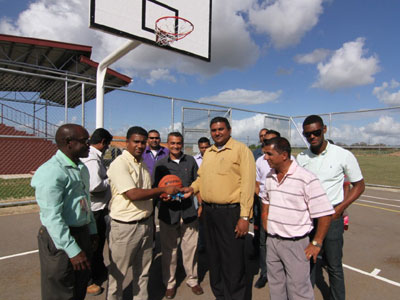 Two Central Trinidad communities can now enjoy the camaraderie and joy of sport on their upgraded recreation grounds. The Sports Company of Trinidad and Tobago completed works at the Beaucarreau and Phoenix Park and handed over the keys on Thursday 30 January to a representative of the Couva/Tabaquite/Talparo Regional Corporation.

The Honourable Anil Roberts, Minister of Sport hailed the Sports Company for their quality work in ensuring that communities have access to recreation facilities. “I know the people who live in these communities are extremely grateful for the opportunity to access and enjoy the appropriate venues for sport and recreation. This is all part of the Government’s efforts in all sectors to develop safe spaces where sporting talent can be nurtured and where critical family and community ties can be forged.”

Both facilities are now ready for use with the following amenities:
Phoenix Park Recreation Ground saw action as early as Sunday 2 February with a scheduled women’s cricket league match between Technocrats and Cricket Lovers. Works Supervisor at the Corporation, Ian Gokool said the upgrades were very timely and suited the needs of both communities. He added that both grounds will be independently manages by a committee of stakeholders, including respective village councils and sports clubs in the area. He said, “It will be a community effort in order to maximise the use of the grounds and to maintain the pristine conditions in which the grounds were handed over.”

Secretary of the Beaucarreau Village Council, Reena Persad said she was grateful for the work done by the Sports Company especially given the state of the ground before. “This was just an empty lot basically, before this upgrade. People used to park trailers here and we had to jump over a drain to access it. But now that there are proper facilities, there is no end to the kinds of events that we [Village Council] could host, and not just sport but family day activities and cultural events as well. I am looking forward to having regular aerobics sessions on the hard court as well as bringing my family to see cricket and football matches, right here in my community.”

Sharing similar sentiments was Gangaram Gopaul, Councillor for Brechin Castle/Esperanza. He said, “We got a really nice facility here and the preparation of the outfield and pitch are excellent. I can foresee a busy time for the ground but we are determined to mainstream the facilities so they can be enjoyed for generations to come.”

Phoenix Park, Beaucarreau and Knowles Street are the three recreation grounds already handed over by the Sports Company of Trinidad and Tobago, whose remit it is to upgrade these grounds for the benefit of grassroots sport and community enhancement. 19 more grounds are currently under construction at various locations across the country. During the tour of the grounds, Sports Company officials informed those gathered that the new facilities could also now accommodate the Youth Sport Camps held during vacation periods, which instruct children and youth on the fundamentals of various sports free of charge. The venues, as they are closer to home and easier to access, thereby engendering higher participation rates in these communities.

These handovers are largely operational, and for the benefit of the custodians of the facilities but ceremonial openings to be held at other venues will be announced within communities. In the meantime, residents are free to use the facilities as guided by the respective Regional Corporation.

Image courtesy the Sports Company of Trinidad and Tobago