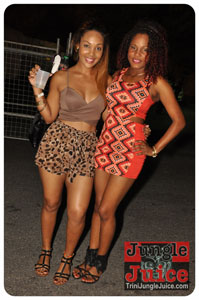 Ladies 1st Valentines Edition was anything but EPIC.

Even though the tone was set for an epic night as getting through the entrance was a breeze, with the ladies being greeted by bare chested Hershey’s Kisses chocolate bearing men and with O2 Park being beautifully decorated, it was however pure heart ache when it came time to get your drink on as there were only two large understaffed bars to serve an estimated crowd of over 4,000.  You know that things are real bad when you see the promoter of the fete serving drinks himself!  Regardless of this the Ladies 1st Loyalist tried to make the best of things.

With the four big headlining acts of Destra, Kerwin Du Bois, Bunji & Faye Ann, and Machel it was however two lesser known performers who made the biggest impact of the night... namely Renzo’s dancer Bubbles and new Soca Sensation Syo!  Bubbles had the crowd going wild with her reminiscent HD Family’s Dancer Britney styled routine, while Syo’s Latin infused Soca had captured the ladies’ hearts.

And let’s not forget the main run order of the entertainment for the night which evolved from good, Better and finally BEST with Kerwin, followed by Bunji & Faye Ann, and finally Machel.  Yes I did leave out Destra in the main run order as she was only ‘aright’ as she tried tirelessly to hype the crowd with her backup singer Silva.  However other expected first-class performances could not quell the irate crowd as they had to wait for over two hours after Bunji finished for Machel to eventually hit the stage after 5am in the morning!

But even this delay could not deter the U.W.I Year 3 Electrical Engineering Team who made their presence known with their wassy behaviour which even made Machel acknowledge them as they waved a Belizean Flag!!!

In the end Ladies 1st had the recipe for an epic event but simply did not pan out that way...