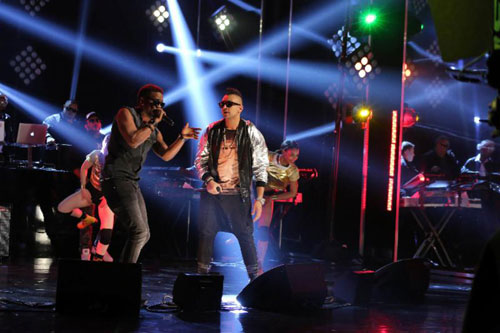 New York, New York (February 17, 2014).  As we celebrate black history month and reggae month during the month of February, the Jamaican flag has once again been raised high on mainstream television.  On Thursday February 13th, 2014, The Arsenio Hall Show revisited the feature of dancehall entertainment for late night viewers.

More than 10 years ago dancehall icon Shabba Ranks performed on the Arsenio Hall show, prior to this new syndication, with R&B super star Johnny Gill and it was a memorable one. Dancehall icon Patra also performed on The Arsenio Hall show in 1994. During his interview with Arsenio, Sean Paul took the time out to thank Arsenio Hall for giving dancehall the platform to showcase the culture and commended him for having an icon like Shabba and now him and Konshens to be apart of history.

Sean Paul and Konshens performed  'Want Dem All'  Many are saying it was good to see dancehall with good production and not just a DJ supporting the artist.

The performance had social media buzzing, many took to twitter, facebook and instagram posting videos recorded from their television, while some tweeted positive messages for both artists. It was definitely a unification of lovers of dancehall despite what country you reside in.

Im just thankful and happy, big up to Sean Paul for giving me the opportunity to be seen and heard by millions!!  Him coulda hide and go do di show and mek di DJ play my part when it come up like wah nuff man do. (lol) But his approach is ego free, he sees it as having the hottest and most promising dancehall artiste on his track. I see it as..somebody opening a door for me, which is not a regular occurrence!! A great production and everybody loved it, the band dancers DJ's and backing vocalists all brought it.... Was a good day for dancehall.  Get that album, FULL FREQUENCY Im featured in the lead single but i heard so many LEAD SINGLES on it (lol)  It baddd, says Konshens.

Konshens is currently promoting two singles Big People Ting and Independent Girl, both of which are getting great response from international radio. Konshens kicks of his US tour on February 25 and will be making several stops at numerous colleges.