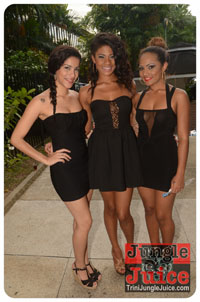 On the last Sunday in February 2014, Misty Ridge Events celebrated their 10th carnival contribution with the theme, “Where Nothing Is Ordinary”.

As an official party Maco, I never deem an event a flop solely based on turn out.  With that said, Misty Ridge 2k14 proved to be one of those intimate events with enough vibes and energy to go around. I would imagine when Farmer Nappy wrote about big people party, he had a party like Misty Ridge in mind.

Special guests included Acting Prime Minister, who by the way I almost ran into. Ministers of Communication and Food Production also came out to support the event. Bunji Garlin with wife watching on from the sideline, Kerwin Du Bois and Farmer Nappy graced the stage keeping the crowd entertained.

Besides endless vibes and lots of great performances, drinks and food was without shortage! Full course meal consisting of spanish rice, lasagna and baked chicken or if you was feeling for something smaller, tasty geera pork, shrimp wantons and spring rolls were also on the menu.

Thanks for having the TJJ Crew!