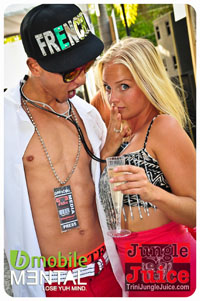 Those were the words that echoed from the Soca Sanatorium set poolside at the Carlton Savannah and across to the St. Ann’s Hills on Carnival Wednesday as Trini Jungle Juice hosted the newest addition to the list of must-go-to Carnival events appropriately called MENTAL!!!

The tone was set for an epic evening of global proportions as Trini Jungle Juice tried to cure some of the large crews dressed in sexy chic attire and swimwear from Jamaica, Barbados, St. Lucia, St. Vincent, Bermuda, Toronto, Miami, Houston, New York, Washington D.C. and of course T&T from their ‘Soca Addiction’ at this sold out Premium Drinks Inclusive event.  Even the consulting Soca Therapists like DJ Hazzard from Washington D.C., DJ Erykah (Sugarcane DJ Crew) hailing all the way from Sweden, Dr. Jay de Soca Prince from Toronto, Natural Freaks’ Tony Cross reppin’ NYC, Nuphoric, Dei Musicale and Private Ryan from T&T all tried to administer the necessary treatment to these patients but instead caused them to wine even crazier (#ScandalousWining)!!! By the way, what an All-Star DJ cast. 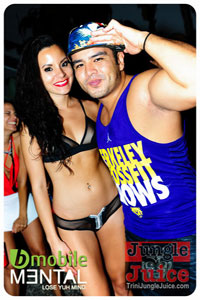 And speaking of crazy, these Mental patients displayed even more mad behaviour as the sun set when they redirected their wining into the pool as people started wining in the water and on every inflatable device in sight.  Even Walshy Fire and Jillionaire of Major Lazer and Vincy’s Skinny Fabulous were left with their mouths agape after seeing an inflatable crocodile being so violated!

The crazy night then climaxed with surprise performances from Preedy “The Wining Champion”, Mr. “Conquer Meh” Lyrikal and “Rolly Polly” himself Mr. Killa.  In the end, Mental was gone pass epic (#GonePassEpic) and is permanently on my list of Carnival Fetes!

Keiron was there... where were you? #JungleJuiceConquerMeh 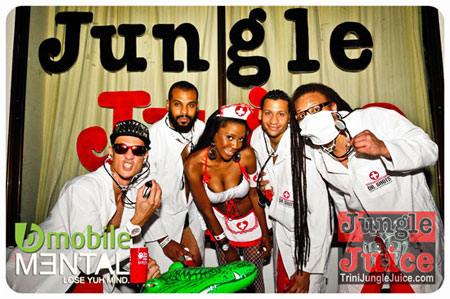