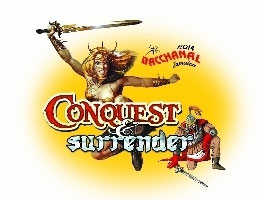 The Carnival season is always anticipated with great excitement, soca music with its electrifying beat captures the spirit of Caribbean people, and Bacchanal is the syringe that for years has injected an intoxicating elixir of ‘feel good’ vibes and unadulterated fun. The 2014 season will be no exception with its trusted formula of wildly popular and liberating fetes.

Bacchanal Jamaica kicked off the New Year with its annual Band Launch, where eager soca junkies in search of their seasonal fix, came out in their numbers for a good lime. Patrons were given a first look at the sectional costumes and the theme for this year’s staging was revealed. The 2014 theme, Conquest and Surrender is an adventurous and medieval approach that suits the imperial style of carnival. When asked about the decision behind the theme, Director at Bacchanal Jamaica, Charmaine Franklin said ‘it’s a play on conquering the road with revelry, as the ladies come to play mas with a splash of colour and a fine display of beauty, surrendering to the sweet sounds of the soca music.’

The event series kicks into full gear with the opening night of Bacchanal Fridays on March 7.  The energy filled Socasise Mondays and Wednesdays follows soon thereafter on March 10 and 12 respectively. Socasise, which fuses healthy living with entertainment has garnered tremendous support from Headline sponsor Gatorade.  Both events are scheduled to run successively each week, with Bacchanal Fridays featuring electrifying performances by Roy Cape with Blaxx on March 28 and Destra on April 11 for Digicel’s Finale Night.

The revelling then shifts cities as the series conquers the North Coast for its annual Beach J’ouvert on April 19. The James Bond Beach venue will come alive as “We Ready for the Road” soca star, Bunji Garlin and Faye-Ann Lyons take the stage. Not to be outdone, Bacchanal J’ouvert will feature performances by Kes and Patrice Roberts on the following Friday, April 25

The season will wrap up on Sunday, April 27, with the annual road parade. This year’s mas will re-introduce the spectacular presence of a Carnival King and Queen, leading the parade of 15 sections. The organisers have also partnered with tour operator Carifique to promote three hotel and activity packages that include many of the scheduled events including the road parade. The package deals will encourage tourists as well as persons outside of Kingston and St Andrew to participate in the activities.

This article is part 1 of a 14 part series. Other articles in this series are shown below: