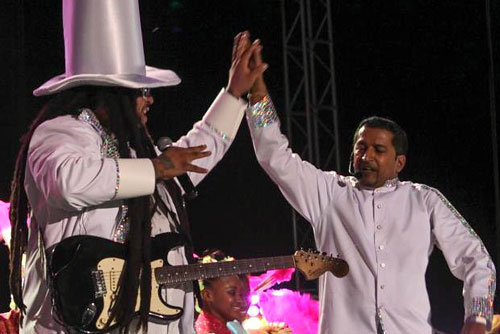 POS, Trinidad (Sonique Solutions) – On the heels of what many are deeming a truly memorable performance at the 2014 Chutney Soca Monarch, Rikki Jai and Nigel Rojas continue to receive much love from music fans and the Caribbean entertainment industry on their collaboration “Clap Your Hands” which continues to gain steady airplay both locally and internationally.

The Punkalunks Factory-produced track which has been described as boasting both the elements of original Chutney music and the vibe and delivery of modern day World music not only secured the duo a 2nd place victory at the CSM finals but also garnered them rotation on several urban and adult contemporary radio stations in T&T, the Caribbean Region and various parts of the international Caribbean Diaspora.

Both dressed in white, Rikki, the 6 time Chutney Soca Monarch King and Rojas, the Orange Sky rocker delivered a stellar showing at the competition. The performance warmed the hearts of several patrons and viewers as the duo paid tribute to past and present Chutney icons and even invited veterans such as songstress Drupatee to join them onstage.

Rojas who is currently preparing for a 9 city tour in California with Orange Sky was a newcomer to the CSM stage and refers to his first experience as a truly amazing one. He shared, “The atmosphere at the Monarch was one of real vibes and anticipation, the vibe backstage was bustling as everyone was wrapped up in their own preparation for their presentation. The ambiance was really frantic, but cool”.

Regarding his performance with the legendary Rikki Jai he stated, “Onstage was awesome, it was an incredible moment seeing Rikki literally levitate across the stage with energy and expression”.

Rikki will throughout the year hit several stages, Carnivals and world festivals singing his immense catalogue of hit Chutney and Soca songs. The devoted husband, father and entertainer foresees tremendous growth and potential for ‘Clap Your Hands’ as a true World Music offering and aspires to utilize the song as a means of showcasing T&T culture to non-traditional audiences.