Mavado, Dancehall's Leading And Most Controversial Star, Returns With His Sophomore Album Mr. Brooks ... A Better Tomorrow In Stores March 3, 2009 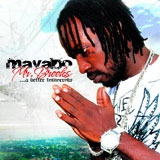 New York, NY -- In early March 2009, one of the most talked about dancehall artists Mavado will unveil the second chapter of his stirring street narrative, Mr. Brooks...A Better Tomorrow, on VP Records. Mavado — who was crowned “Best New Reggae Artist” at the 2008 MOBO (Music of Black Origin) Awards and by Rolling Stone Magazine (April 2008) — is making dancehall a big screen production. The talented singjay from Kingston, Jamaica’s toughest ghetto Cassava Piece, has crafted his strongest album yet — a bittersweet struggle over the dichotomies in his world — past vs. present, hope vs. despair, and freedom from strife.

Following Mavado’s critically acclaimed debut Gangster For Life: The Symphony of David Brooks (July 2007), Mr Brooks...A Better Tomorrow is a true reflection of who Mavado (David Brooks) is today. This second installment of his latest hits and daring exploits are built on apocalyptic synthesizer progressions to which Mavado chats and sings simplistic yet profound lyrics with strong conviction and ease. His contagious hook and clever outlaw antics from the album’s first single “So Special” (produced by Linton “TJ” White) has already turned this #1 Jamaican smash into a U.S. commercial radio hit remaining on Billboard’s Top 100 Hot R&B/Hip Hop Airplay and Song chart for over a month and peaking at #52. The chart toppers will not end here. Mavado pours out his heart and soul on every track from his new diary. While his community is plagued by violence and corruption, Mavado unites the ghetto youth on rally cry anthems like “Overcome” (produced by Stephen McGregor) & “Don’t Worry” (produced by Daseca) and gives thanks to Jah for all his good fortunes on “So Blessed” (produced by Stephen McGregor).  And a Mavado album would not be complete without a steamy track like “In Di Car Back” (produced by Stephen McGregor), where sexual escapades and desires run rampant on this spicy melody. This “rising star with a battle-scarred singing voice” (New York Times) has created a breakthrough set for his 2009 release.

With a string of massive underground hits running back to 2006, his international street credibility, collaborations with hip hop’s biggest names (Jay-Z, G-Unit, Foxy Brown, Wyclef, Lil Kim and Busta Rhymes), his first album Gangster For Life: The Symphony of David Brooks remaining in the Top 25 Billboard Reggae sales chart since its debut, major scores and endorsement deals, Mavado has gone from obscurity to ghetto super stardom. Deemed the “Gully God” by fans and media, the controversy surrounding him has also ignited an enigmatic gangster façade. Part prophet, part superhero and part fugitive, Mavado is the voice of the streets and represents dancehall for the new generation.