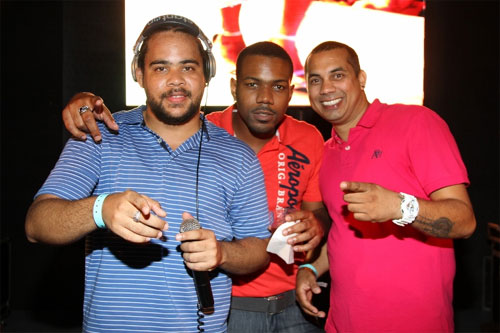 Spirits were high and excitement was in the air as Bacchanal Jamaica kicked off the carnival season with Three the Hard Way at the Mas Camp last Friday night.  DJ Smoke, DJ Sanjay and DJ Richie Ras kept the momentum high with each trying to outdo the other in their delivery of the 2014 Soca selections.

The Mas Camp was transformed into an ancient Greek battleground in anticipation of the conquest and eminent surrender of the patrons to the undeniable pull of Bacchanal 2014.  As one entered the venue, you could not help but be impressed by the magnificence of the “Forbidden Estate” an elegantly appointed area sponsored by Appleton Estate which catered specifically to the VIP patrons. This all inclusive lounge offered a variety of drinks including a selection of Forbidden Estate Cocktails with 2014 soca music inspired names such as Rolly Polly, Red Light and Epic.    Pepperpot soup and a mix of delectable sandwiches also kept patrons well sustained and able to handle the range of alcohol that they could choose to imbibe.  The Forbidden Estate was definitely the place to spot the who’s who on the social scene. Not to be outdone, Digicel, Matterhorn, Pure Country Pepsi and Sparkles also created unique and interesting lounge experiences.

The night was sponsored by Smirnoff whose impressive bar was jam packed all night offering special Smirnoff cocktail mixes and their popular mug deal which allowed patrons to get one of the signature line of copper metal mugs.  When asked about their expectations for 2014 season, Jermaine Bibbons, brand Manager Spirits for Red Stripe commented, “Smirnoff is ready for the Conquest.  This year we will introduce patrons to a range of exciting Smirnoff cocktail fruit mixes which already have been very popular tonight. We must highlight though that while we will ensure that guests have access to a wide range of our products, we are being very serious about responsible drinking and so all patrons must be over 18 and be banded to be legal to drink.  Bartenders will not serve anyone who has not been banded.” 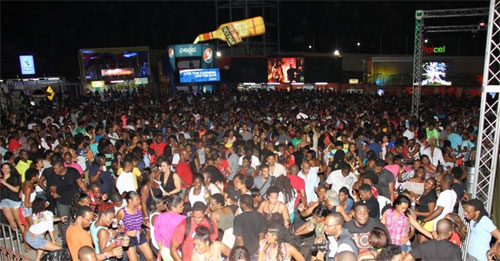 As usual the costume display was a highlight of the night.  The stage burst into a fantastic display of colours, feathers, beads and glitter as the models paraded their representations of the heroes, gods and kings of Greek mythology.  Bacchanal Director Charmaine Franklin remarked, “Costume sales are doing extremely well.  Only four costume designs are now available Muratmatsu & Takeka sponsored by Smirnoff, Napolean and Josephine sponsored by Appleton, Samson and Delilah sponsored by Fame and Tristan & Isolde sponsored by Jamaica Observer.  With the addition of the outstanding front line sections in some groups plus the imposing King and Queen costumes which will lead the parade, we expect a deliver a true spectacle on the road.  We do also understand that there are persons who may wish a less risqué costume option and so as usual we will have our T shirt costumes as well as our tank costumes, sponsored by Pure Country,  that give a little sexy without being overtly revealing.  We think this will be quite a popular option for some of our more mature revelers”

The glue that held the night together however was the music.  The three DJs started and kept the night on a high with the new 2014 Soca music fresh from Trinidad Carnival.  DJ Smoke was ecstatic to see the response of the crowd and remarked “With so many hot songs from this year’s Trinidad carnival, I wanted to make sure to expose as much of the music to the crowd. I did and they certainly accepted it so there was really no need to concentrate on too much of the older stuff”.  DJ Sanjay of FAME shared his thoughts, “The vibe tonight is just so great. We are delivering the music and the people are really responding well.  For my part, I will certainly make sure that the music gets out there to the public as it’s the music that creates the energy behind the carnival.”  DJ Richie Ras was not to be left out, he commented, “It’s my goal to make sure that everyone knows this year’s soca long before the road parade so this year for the first time  I worked with Bacchanal to create a mixed CD that was distributed before tonight, so that persons would be familiar with the music when they arrived at the Mas Camp. It certainly worked and that added to their enjoyment tonight.  We did not have to fall back on the oldies to get a vibe.”  While there was friendly rivalry between the DJs throughout the night, their singular objective of exposing the best of the music was achieved and overall it was indeed Three the Hard Way as each delivered his skill with competence, professionalism and style.

Bacchanal 2014 is off to a great start with a VIP selling out by 10 pm and the rest of the venue full to capacity by midnight.  The season continues with Socasize each Monday and Wednesday from 6pm to 8pm and of course Bacchanal Fridays each week until April 11th. The weekly series is followed soon thereafter by the popular fetes Smirnoff Beach J'ouvert, Bacchanal J'ouvert and the annual Road Parade on April 19, 25 and 27, respectively.

This article is part 1 of a 13 part series. Other articles in this series are shown below: