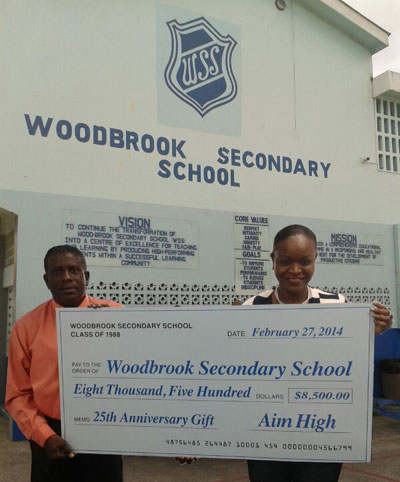 Qualifying for the ING New York City Marathon does not come easily. It goes without saying, therefore, that competing in this grueling race (26.2 miles) was no stroll in Central Park. For Dexter Webb, member of the graduating class of Woodbrook Secondary School, 1988, completing the 2013 marathon on November 3 is an accomplishment of which he feels quite proud... and he should!

As he approached his 40th birthday, Dexter decided he wanted to do something significant to herald in his fortieth year. For him, qualifying for the marathon seemed just the right challenge. Towards the end of 2011, he set out in pursuit of this goal and by October 2012 had completed the required nine qualifying races for guaranteed entry into the 2013 marathon.

In preparation for the race, he continued his regular weekly runs, even packing his running shoes for his trip home in 2013 and doing several runs from his hometown, Carenage, to Macqueripe. He later embarked on an 18-week marathon-specific training program and ran two half marathons for good measure -- The Brooklyn Half in May and The Staten Island Half in October, just one month before the big race.

Dexter’s participation in the marathon caused much excitement among the WSS Class of ‘88, whom he enlisted for a 25th anniversary fundraiser to give back to WSS by pledging to sponsor each mile he ran, starting at $10 per mile. On race day, classmates took to social media to cheer virtually and keep each other apprised of his progress through New York's 5 boroughs, following the race in real time online – every minute of it!

Despite suffering a hamstring injury at the 21 mile mark, Dexter was determined to finish, and did so in an impressive time of 3:44. Following the race, he posted a Facebook message to his former classmates saying, “I could sense good vibes all the way. I could only wish that I was able to hear [your] comments as I was running. They would have been a much-needed boost, especially during those tormenting last 5 miles.” The picong for which WSS grads are well-known was also a source of inspiration, as he jokingly said that the thoughts of ole talk from the ’88 guys kept him going while slogging through the final miles.

On Thursday February 27th 2014, graduates of Woodbrook Secondary School (1988) presented a cheque valued at $8500 to Principal, Sean Tull, a gift from the Class of ‘88 to commemorate twenty-five years since leaving their beloved alma mater.

The idea for using the race as a fundraiser came out of Dexter’s belief that class members should use their 25th anniversary year to commemorate in a special way their years spent at WSS.

More importantly, the Class of 1988 25th Anniversary Gift is intended to help promote a culture of alumni giving at WSS.

The hope is that other year groups will follow suit and find their own creative ways of giving back to the school.