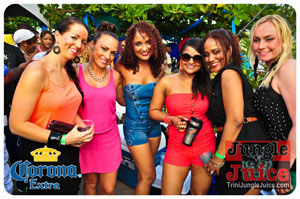 In the Trinidad Carnival industry dominated by cooler fetes, and various adaptations, an exciting and entertaining cooler fete such as Bayview Cooler Fete is, was and always will provide patrons with pure jubilation and non-stop pore raising excitement. Some will warm to its oblique crowd, philosophy-loaded conversations (alcohol induced), soca vibes and atmosphere, strong DJs, and merciless wining and dancing; while others will spill from the venue just wanting more upset that the event actually has to end!

The idea, such as it is in the name, sees Cocoa Devils posse inviting friends, close friends, family and friends of friends, involve some top notch DJs, tell patrons they could bring their own liquor and poison & they will provide the beautiful venue that is the Maracas Beach look out. What else can you ask for to celebrate your Carnival Friday Afternoon into Evening for 2014 in Trinidad. Why we don’t know about this event or never went to this event and have only been there from 2013 (see coverage) ... we still cannot answer that question!!

The deal with this fete, inevitably, is an excellent deal! It's not your fault if you were not there (actually it is). We do not believe in coincidences but from TJJ's perspective - two years in a row, same fete, same experience, same perfection, same excellence ... what more can we ask for as party gurus!?  The ins and outs of the crowd at this cooler fete was simple - mature, chic, attractive and sociable! The solution to a successful event starts from the actual crowd. The crowd makes the other elements stir, cook, marinate and bubble like a hot corn soup.

The beautiful venue confines people to the periphery of wining, drinking and at the end becoming more and more sociable .... also known as ... Vibes! First timers to this event sometimes wine like they are Never See Come See! (Actually its the only time we can use that phrase in a positive manner!)

We all know alcohol can provide a murky, pitiless underworld governed by rules that even the most intelligent people cannot comprehend, however, at Bayview Cooler Fete, the alcohol provides such a remarkably glorious and sheer exciting environment combined with Soca music, only one word comes to mind .... EXCELLENCE! Sometimes, you can see single people or couples immersing themselves into their own worlds ... it was too sweet! 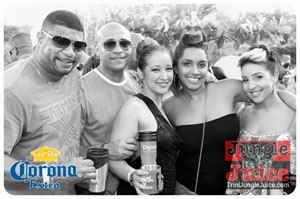 We still stand by the fact that certain experiences cannot be explained via words. Screaming voices of enjoyment and insatiable mannerisms expressed by patrons can only be described best by seeing the actual pore raising behaviour! No pretentious people here! Nothing but sleek positive energy and what we like to call a "Forget Your Problems Event". Every possible visual in this event was beautiful in their simplicity but yet we are sure etched in hi-definition in the memory banks of the patrons!

Verdict:
A sexy, bold and enthralling cooler fete that favours positive, realistic and mature characters! Profound & Intelligent behaviour most present and all set over a propulsive venue! Still remains and will continue to be a staple on TJJ's Trinidad Carnival Diary!