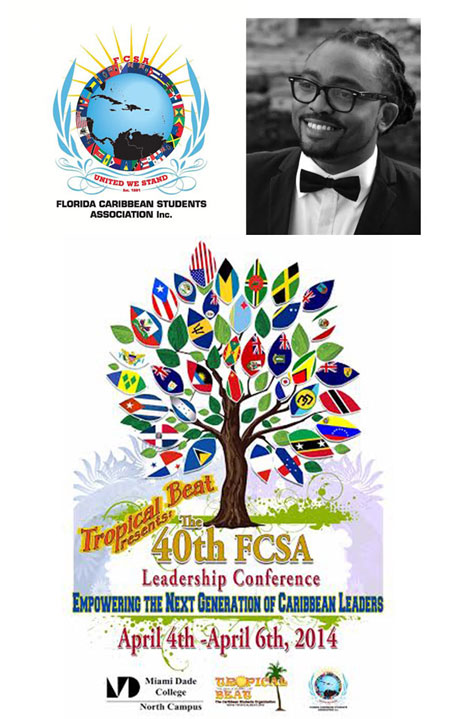 April 4-6, 2014
Empowering the Next Generation of Caribbean Leaders

The Conference will welcome over 700 college students of Caribbean descent from around the State of Florida and around the United States to participate in leadership and professional development workshops geared toward the enhancement and empowerment of the next generation of Caribbean student leaders.

For over thirty years, Machel Montano and his Team HD (formerly XTATIK) has been an internationally recognized band from Trinidad & Tobago in the music forms of soca, calypso, and other Caribbean and popular music genres. Machel Montano & Team HD has been the recipient of numerous songwriter and performing artist national and international awards.  In 2008, Machel Montano was awarded the Bob Marley Award for Entertainer of the Year 2007, Best Calypso/Soca Entertainer 2007, and named the Most Outstanding Stage Personality at the International Reggae and World Music Awards at the historic Apollo Theatre in New York. That year also found Machel receiving an award at the 1st Annual BET J Virtual Awards for Best Caribbean Artiste of the Year.    In May 2011, at the 30th Anniversary of IRAWMA, held in Port of Spain, Machel secured six (6) awards: Most Outstanding Stage Personality, Best Male Calypso/Soca Entertainer, Best Caribbean Entertainer, Most Outstanding Show Band, Best Soca Band and The King of Soca Award. In November of 2011, Machel was nominated by the Soul Train Awards for Best Caribbean Performance.

Machel Montano is a six-time Road March national awardee in 1997, 2006, 2007, 2011, 2012, and recently in 2014 Trinidad Carnival and was also crowned as the Power International Soca Monarch in 2014.  In addition, Mr. Montano has been recognized for his contributions as an artiste and entrepreneur, as a Caribbean Outlier by The University of the West Indies' Arthur Lok Jack Graduate School of Business.

Similar to his accolades on stage and in the studio, Machel Montano has also supported or organized numerous charitable concerts, including the Children's Life Fund, Eastern Caribbean Flood Relief efforts in St. Vincent, and countless other regional and international causes.   His professional and business acumen has also created a number of entrepreneurial opportunities for members of his team and others throughout the Caribbean region.

"We are truly excited to hear from one of the Caribbean's legendary music voices. His passion, commitment, and contributions to Caribbean music, arts, and culture reach across generations.  We look forward to his inspiration for our leadership journey," stated Fabrice Stuart, president, Florida Caribbean Students Association.

FCSA provides a statewide platform of leadership development, civic engagement, community service and cultural awareness among college and university students of Caribbean descent throughout the state of Florida.  The FCSA conference is the leading Caribbean student event in Florida at which a wide cross section of Caribbean countries is represented. The 2014 Conference will explore the cultural, leadership and civic engagement in the Caribbean community. In addition, the Conference will feature the best in Caribbean entertainment.

Since 1991, the Florida Caribbean Students Association, Inc (FCSA) has served as a leading student network of over 28 different organizations and thousands of students of Caribbean descent at colleges and universities across Florida. FCSA is a non-profit organization committed to the development of successful student leaders, the promotion of academic excellence and the enhancement of cultural awareness and civic engagement among Caribbean college students.