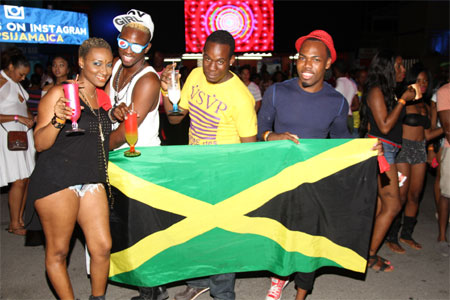 Flag bearers and soca warriors streamed into the Mas Camp this past Friday, eager to see what the second installment of the Bacchanal event had in store for them. Organisers surprised guests with a slight change in the venue’s layout. The focal point had been moved to the DJ booth, which in contrast to opening night, was placed in the centre of the venue. Patrons however, seemed to enjoy the switch, which facilitated a more intimate interaction between the selectors and the crowd.

International guest disc jockey, D’Bandit helped kick off the night in good fashion with a few flashback soca tunes before launching into his 2014 music set.  The Toronto native set out to impress his first time audience to which, by the end of the night, he succeeded.  As expected, popular local DJ Smoke delivered a stellar set, which left Mas Camp fans yearning for more. Appleton brand ambassadors outfitted in their medieval inspired attire encircled the platform of the DJ booth to create a fun, dance synergy that kept patrons engaged throughout the night.

By midnight, the raving simmered a little as exclusive newspaper sponsor, The Jamaica Observer, prepared to announce the winners of their Bacchanal “Chip Dung Di Road” promotion. Entrants listened in keenly in the hopes that they would be named the victor, but in the end it was Ayesha Facey and Julius Drake who were triumphant in winning the coveted prizes.  The elated winners proceeded to the costume display area for a photo-op and to sign up for their Tristan and Isolde costumes. The feting soon resumed with the same high energy and concluded on yet another high note.

Bacchanal Fridays continues this week with the RJR Group sponsored night. Popular selector, DJ Sparks will be joined by DJ Myles from Trinidad, to what is gearing up to be an exciting week three. Soca enthusiasts are also encouraged to come out for Bacchanal’s Socasise, every Monday and Wednesday at the Mas Camp from 6:00 p.m. to 8:00 p.m.

For more information on Bacchanal Fridays or any of the other Conquest and Surrender events, visit www.bacchanaljamaica.com, or BacchanalJamaica on Facebook or Twitter and Instagram @Bacchanalja.

This article is part 4 of a 14 part series. Other articles in this series are shown below: