Fame 95FM for Bacchanal this Friday 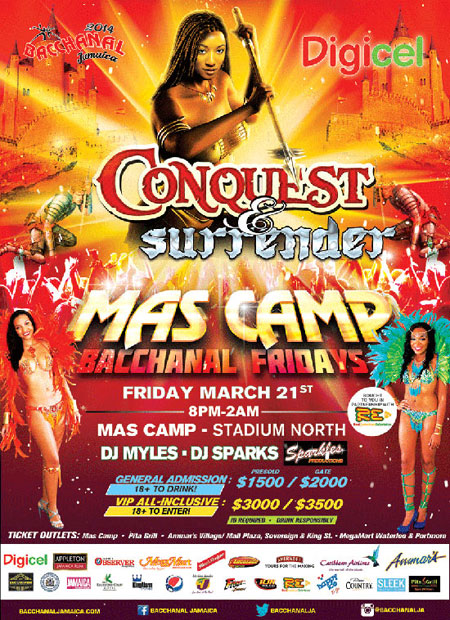 RJR Communications Group party station, Fame 95FM will sponsor chapter three of the Bacchanal Friday night series. The event, which continues to receive rave reviews as the Friday night, chill out and unwind spot,  has many eager for the other upcoming Conquest and Surrender series fetes. To get carnival enthusiasts pumped for their favourite time of year, Fame 95FM has been rotating the season’s hottest hits through their daily Soca music segment. And the station will continue to supply ‘bacchanalists’ with exclusive behind the scenes information for each event, all season long.

The popular station will also roll out an engaging promotion for their online followers. Kereene Mcarty of FAME recently revealed that a ‘Rolly Polly” video competition will soon be executed. The fun promotion will prompt Fame fans to upload a video of themselves performing their best moves to the wildly popular Mr. Killa hit. The Blazing 95 will then decide which Rolly Polly male and female fan is most deserving of the coveted Samson and Delilah costume prize, based on their video submission. The night will be a full house Fame Friday, hosted by the station’s ‘Curvaceous Diva’, Yanique Barrett with music by resident Fame DJ, Sanjay, DJ Sparks and DJ Myles from Trinidad.

Tickets are on sale now at the Ammar’s Kings Street, Sovereign, Mall/Village Plaza locations, Pita Grill, the Mas Camp as well as through Zimi ticket outlest. For more information visit www.bacchanaljamaica.com, the Facebook page at BacchanalJamaica or Instagram and Twitter @bacchanalja.

This article is part 5 of a 14 part series. Other articles in this series are shown below: