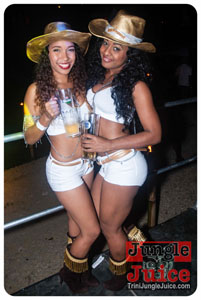 The big week is finally here and Trinidad carnival is in full swing.  It has been a while since I’ve arrived in time for this one but it has been one of favorites since its inception, the good old A.W.O.L days.  We headed straight to La Soledad eagerly anticipating Fall Out.  Parking was easy as there were many secured lots along the way with shuttle service to the venue.

As always, the ambiance was on point and the crowd was already pretty thick on the inside.  The venue was definitely an estate setting that added to the atmosphere but it also meant the fete was a bit spread out.  Fall Out is known for good vibes and it certainly lived up to that from early.  Unfortunately by the time we decided to check out the food we were too late.

The Viking himself, Bunji Garlin, tore down the fete and we were also treated to other soca stars as well; Preedy, 5 Star Akil and one of the most sort after artistes this season, Kerwin Du Bois!  Talk bout getting your monies worth in one fete.  The fete went on past the expected end time, which is always great but then there was another unexpected surprise.  Can you say Truck-on-the-Road!  Imagine you leaving a fete that already had real vibes and while you walking down the road is more tune in yuh tail.  Niceness!

This one has really grown by leaps and bounds since the last time I did it.  There will always be some growing pains when you taking it to the next level but nothing that can’t be remedied for next year!  Thanks to the Ian, Tricia, Chris and the Fall Out family for having us.  See you next year!

- Wade aka The Party Appraiser