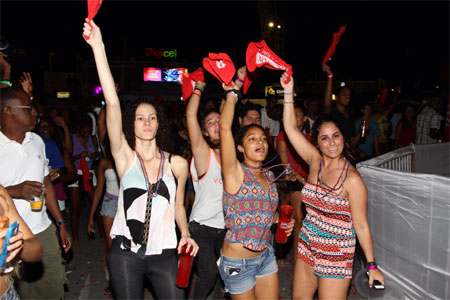 March flags, confetti and spectacular performances galore, are just a few of the words that would accurately summarise Bacchanal’s premiere band night this past Friday, March 28, at the Mas Camp. The Appleton sponsored night was filled with excitement as the spirit brand enlisted the talents of Mocko Jumbies, dancehall dancers and energetic flag bearers, who kept the crowd engaged throughout the night. The major sponsor also distributed fun props including colourfully lit fans, glowing beach balls and Appleton Special branded rags, which came in pretty handy as the night’s activities progressed.

While Appleton’s, nifty props and compelling performances truly made the night special, it was the highly anticipated Roy Cape and the All Star Band with Blaxx, that made this particular Bacchanal Friday one for the books. The vibes and energy of the group transcended onto the audience who remained amped up throughout the stellar set. With Cape’s remarkable guitar skills and the band’s endearing onstage presence, the band truly captured the essence of soca music as well as the carefree spirit of carnival. The band kicked off their performance with their 2013 mega hit “Leh Go” and a string of current 2014 soca songs followed soon thereafter. The All Star Band covered tunes from artistes such as Destra, Bunji Garlin, Machel Montano and Kerwin Du Bois. By the end of the night it was clear that the All Stars lived up to crowd’s expectations and more.

Resident Dj Smoke of Renaissance also delivered exceptional sets before and subsequent to the band’s performance. The reveling continues with just two weeks left in the popular Friday night series. This week will feature the Appleton sponsored, Red Conquest themed night. The event is a collaborative venture between Bacchanal Jamaica and the soca enthused Island Vibes team. Fans can expect great specials and surprises including a RED Special, which offers a 50 percent discount on a third Bacchanal carnival costume when two are purchased at full price. Tickets for Bacchanal Fridays – the Red Conquest edition are available at the Mas Camp, Pita Grill, Zimi Tickets as well as the Ammar’s Mall/Village, Sovereign and Kings Street outlets,

This article is part 7 of a 14 part series. Other articles in this series are shown below: