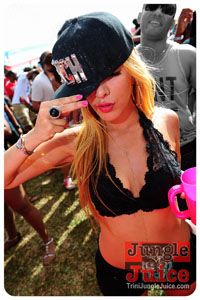 'One Music Uniting the World Under One Sun'

DJ Private Ryan, known for his world renowned Soca Brainwash podcast (this... and of course being labeled as the Most Versitile DJ in the world), presented Soca Brainwash 'The Event' on Carnival Saturday Morning at the virgin venue, Fatima College Grounds.

This drinks inclusive event carded from 10AM-4PM got off to a late start, but so did the majority of partygoers who arrived around 1PM. The venue was well laid out (could have been a little tighter) with adequate drink and food stations to keep the massives content as both the blaring music and hot sun came right down. It was like Sports Day as we braved the heat, while most folks searched for any shade possible. But heh, we’ll take Sports Day over a rainy, mud fest!

There was a great selection for brunch, including Corn Soup, Kebabs, Lasagna and Roast Pig. But as usual, Bake & Shark trumped. However for me, it was all about the local chow – mango, pineapple, pommecythere and other delicacies all nicely mixed up.

With an international cast of DJs & MCs, including the likes of Back to Basics, Hazzard, Barrie Hype, and Tony Cross, it wasn’t long before the majority of the crowd gathered front stage to get into party mode. And having the Fire services tell everyone to clear the Stag/Carib Brewhouse because it was way over capacity most certainly helped to get this party started… no more shade people!! Time to JAM in d ‘HUTTT SUN’! 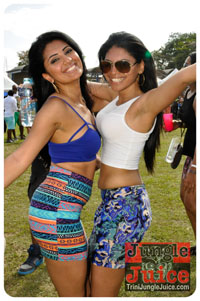 Private Ryan came on the one’s and two’s around the party’s peak, but it was our good friend Walshy Fire of Major Lazer / Black Chiney that had to apologize to all alcohol sponsors and distributors for being responsible for wasting their product as he had the Soca Brainwashed crowd in a frenzy to Major Lazer’s 2014 hit sound featuring Machel Montano, “Sound Bang”.

The dance ended around 5PM, and although Private Ryan told us it was impossible to find a way to “un-brainwash” ourselves from all the sexy women, free drinks and madness enjoyed at his event… he let us know to look out for bigger and better things for Soca Brainwash ‘The Event’ come 2015. And as previously stated, first we have to get “MENTAL” before getting “BRAINWASHED”.


If you can’t go hard... it’s best you stay home!
Dre aka The Carnival Ref