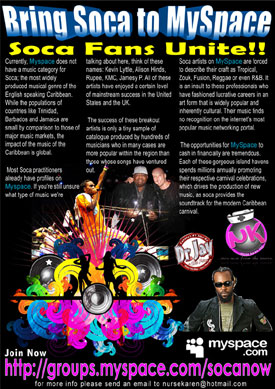 Toronto, Canada  - A new advocacy campaign was launched yesterday to officially list soca as a musical genre on the internet entertainment portal, Myspace.com.  The initiative entitled Bring Soca to MySpace is lobbying to make it easy for fans to browse soca music online and interact with their favourite personalities.

·         The featuring of Soca artist profiles on the site splash page

·         The inclusion of editorial relating to Anglo-Caribbean music

·         The creation of a MySpace Caribbean regional English-language sub-site.

At present, MySpace considers the Caribbean to fit under the umbrella of Latin America.  Therefore Caribbean users often login to into a Spanish-language interface featuring the latest in Reggaeton and Latin Pop.  Organizers believe that the end result of the above recommendations will create a win-win situation for the soca music industry, fans and MySpace alike.

"Every other style of Western music is up there," says campaign organizer and Caribbean entertainment writer Nurse Karen , "We are simply asking MySpace to give soca artists the respect they deserve.  Artists already use site, but they have to describe their sounds as Reggae, Tropical, Fusion or Zouk.  There is no category that represents them.   As a result, Soca artists never have the chance rise to the top of MySpace music charts. Soca is way bigger than that, so the time is now for a change."

Supporters may assist in the following ways:

For more information, to get involved or to join the Bring Soca to MySpace group please visit: http://groups.myspace.com/socanow

To send an email to MySpace in support of the campaign

To get your logo added to campaign posters:

Send an email describing your affiliation, along with an attached .jpg to nursekaren@hotmail.com