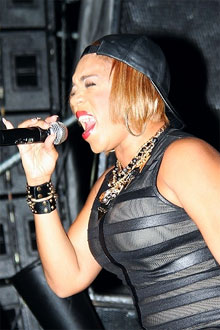 The crowd, the vibe, the energy and the excitement exceeded all expectations last Bacchanal Friday as the Queen of Bacchanal took the reins at the Mas Camp. VIP tickets sold out early in the day and by 11:00 pm a widely diversified crowd filled the venue to its limits. The night was sponsored by Digicel who in their usual fashion set out to make a difference.  Patrons were greeted at the gate by hostesses who made sure that everyone was fitted with a xyloband and of course given a wave rage.

DJs Bambino and Smoke started the vibe going with a series of 2014 soca hits, with DJ Kurt Riley joining the crew later in the night.  A team of Mocko Jumbies danced and worked their way through the thick crowd throughout the night. As the crowd reached a critical mass the lights were turned off and everyone was asked to raise their wrists with the xyloband.  The spectacular vision of red, green and white lights, that emanated as the radio activated bands came alive, left the crowd in awe. This display became the Digicel signature of the night.  The original “fluffy diva” Miss Kitty took the stage close to midnight in her usual fine style kicked up the vibe by introducing a group of fire eaters who gave a stunning performance to the delight of the crowd.

The much anticipated performance for the night finally came and Destra and the Bakanal band took the stage to a warm welcome by the crowd.  The compelling set started with her hit the “First Time” and moved non-stop through a series of 2014 her megahits, “Road Call”, “Just a little Bit”, “Give it to me”  with a few old favourties  such as “Tremble it” thrown in.   She took time out during her set to introduce her new singer Silva who she promised is going to be a mega-star. After one and a half hours of non-stop energy, the Queen’s reign came to an end leaving the crowd wanting more.

The organisers were extremely pleased with the turnout and the night’s activities in general, as confirmed by director Michael Ammar. “This was the best one yet!”, commented a  regular patron of the Mas Camp.  The Digicel team was understandably elated as, once again, they had delivered and gave “soca fans a true experience”, closing out the  Bachannal Friday series “with a bang”, as earlier promised by Tahnida Nunez, the company’s Senior Sponsorship Manager.

All roads now lead to James Bond Beach, Oracabessa for the Smirnoff Bachannal Jouvert on Saturday April 19, which will feature superstar Bunji Garlin with his wife and performing partner, Fay-Ann Lyons. Tickets are now on sale at the Mas Camp, Pita Grill, Zimi Tickets as well as Ammar’s Mall/Village, Sovereign and Kings Street locations.

This article is part 10 of a 14 part series. Other articles in this series are shown below: